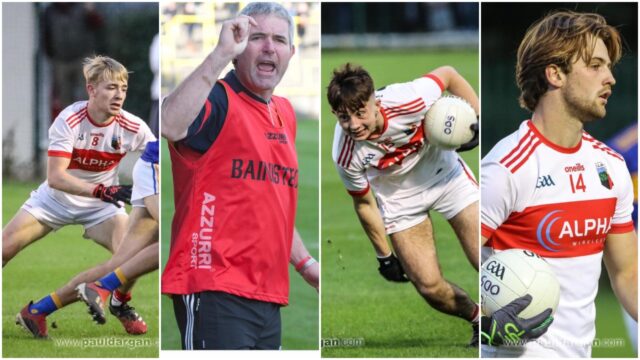 Emo senior football manager John Strong has hailed the efforts of his young players following their famous win over Portlaoise on Sunday.

While Emo last defeated Portlaoise in the early 90s, this was their first knockout win against the Town in almost 50 years.

The four-in-a-row champions were knocked out of the championship at the quarter-final stage as Emo kicked the last five points of the game to beat The Town in knockout football for the first time since 1972.

Incidentally, that was the last time Emo won the championship and it makes up for so many near misses against their great rivals over the years.

In the last number of years, St Paul’s, made up of players from Emo and Courtwood have dominated the underage scene.

They have won several minor and U-20 championships – and a number of those players are part of this Emo team.

They all put in huge performances on Sunday and speaking to Midlands 103’s Jack Nolan after the game, manager Strong heaped praise their way – mentioning two in particular.

“The work rate is brilliant. The lads know themselves that you have to have work rate and that was outstanding.

“Jack Owens scored incredible points under fierce pressure – but with great confidence. Young Paddy Hosey is 18 years of age and he is outstanding.

“But all of the young lads are like that. They have great attitudes.”

Strong’s charges face a potentially long wait to play that semi final now however as all club activity has since been suspended by the GAA ‘with immediate effect and until further notice’.