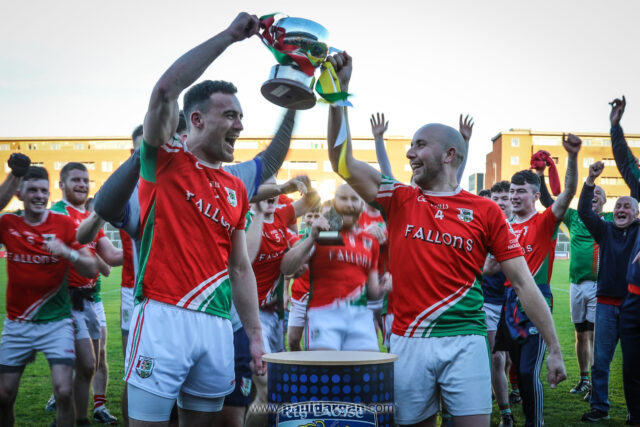 On another busy weekend of club championship action, the week has started with the GAA announcing that all club games have been cancelled until further notice.

We talk about the GAA’s decision to pull all club fixtures – but will proceed with county games later this month.

But we also chat about all of the weekend games.

We have Clonaslee captain John Rigney and manager Conor Gorman on the line to talk about their record sixth intermediate football championship success.

They beat Crettyard in the final on Saturday with Rigney following in his father Patsy’s footsteps, who captained the club to intermediate glory in 1981.

We also chat about the biggest result of the senior football championship – Emo’s win over champions Portlaoise on Sunday night. It was Portlaoise’s earliest championship exit since 2006.

The three other quarter-finals are also on the agenda – Portarlington v O’Dempsey’s, Graiguecullen v Ballylinan and Ballyfin v The Heath.

Plus we look back on the relegation game between Courtwood and Arles-Kilcruise as well as the games in the Junior ‘A’, ‘B’ and ‘C” championships.

Portlaoise ladies continued their winning ways with a Leinster club semi-final success over Offaly champions Naomh Chiaran while Alan reflects on the minor hurling final where Abbeyleix got the better of The Harps after extra time, a result that sees many of the Abbeyleix players complete a minor hurling and football double.

And in a nod to Emo and Clonaslee, we finish out with a rendition of An Old Man’s Wish, by Tom Conroy, AKA Piano Man Tom.

The LaoisToday Podcast · Talking Sport: Clonaslee, Covid, Emo and the end of an era for Portlaoise?