The Rock are one of the smallest clubs in Laois and though they’ve punched above their weight for many years, their Roll of Honours list is a relatively short one.

In the mid 1990s they were a coming force though, consistently producing quality underage players, winning a selection of juvenile county finals at the ‘A’ grade and having plenty of representation on the great Laois underage teams of that time.

But they had plenty of seasoned campaigners too and were hell-bent on getting out of the intermediate grade and up to senior for the first time.

They came through the group stages unbeaten in 1996 thanks to wins over Mountmellick, Portarlington, Killeshin and Ballyfin. They drew with Annanough in the semi-final but had three points to spare in the replay.

A week later they met St Michael’s in the final. St Michael’s were a new name on the scene at adult level in what was just the second year of the Killeen side of the Arles set up.

St Michael’s also arrived to the final with an unbeaten record thanks to wins over Courtwood, Portlaoise, Kilcavan and Annanough in the group stages and then over Ballyfin in the semi-final.

“The Rock have talented players but producing it on final day is their problem,” went the preview in the Leinster Express. The Rock had been hot favourites in the previous year’s final only to be denied by Rosenallis and they had also lost by a point to Killeshin in 1993.

“They will have the best wishes of most neutrals,” added the Leinster Express preview but they weren’t convinced, especially after The Rock could only manage 15 points across their drawn and replayed semi-final against Annanough.

“This must swing the vote St Michael’s way.”

It eventually took extra time after a replay to separate the sides. The Rock looked to be on their way the first day when they led 1-8 to 0-7 with just five minutes remaining.

A goal from Joe Corroon had helped them to a 1-5 to 0-5 lead at the break and they remained ahead throughout the second half before John McDonald hit 1-1 for St Michael’s late on to level things up.

The Rock had a couple of chances to win it before referee Seamus Lawlor blew full time.

Played in early November, about six weeks after Laois had won the All Ireland minor final, one of the stars of The Rock team was corner-back Tom McDonald, who was singled out for praise for the man-marking job he did on Brian ‘Beano’ McDonald. Both of them were still only 16 at the time but would go on to win an All Ireland minor with Laois the following year.

Two weeks later the sides met in the replay in Stradbally. In dreadful conditions, the sides played out a thriller.

It was low-scoring for the most part and The Rock led 0-4 to 0-2 at the break. But St Michael’s got their noses in front when Gerry Enright got a goal early in the second half.

Joe Corroon and Paul Dunne nudged The Rock back into the lead before Gilbert O’Sullivan and Beano pointed to swing it back in favour of St Michael’s.

Enright was unfortunate to see a fisted effort come back off the bar as another goal at that stage would surely have finished the game off. 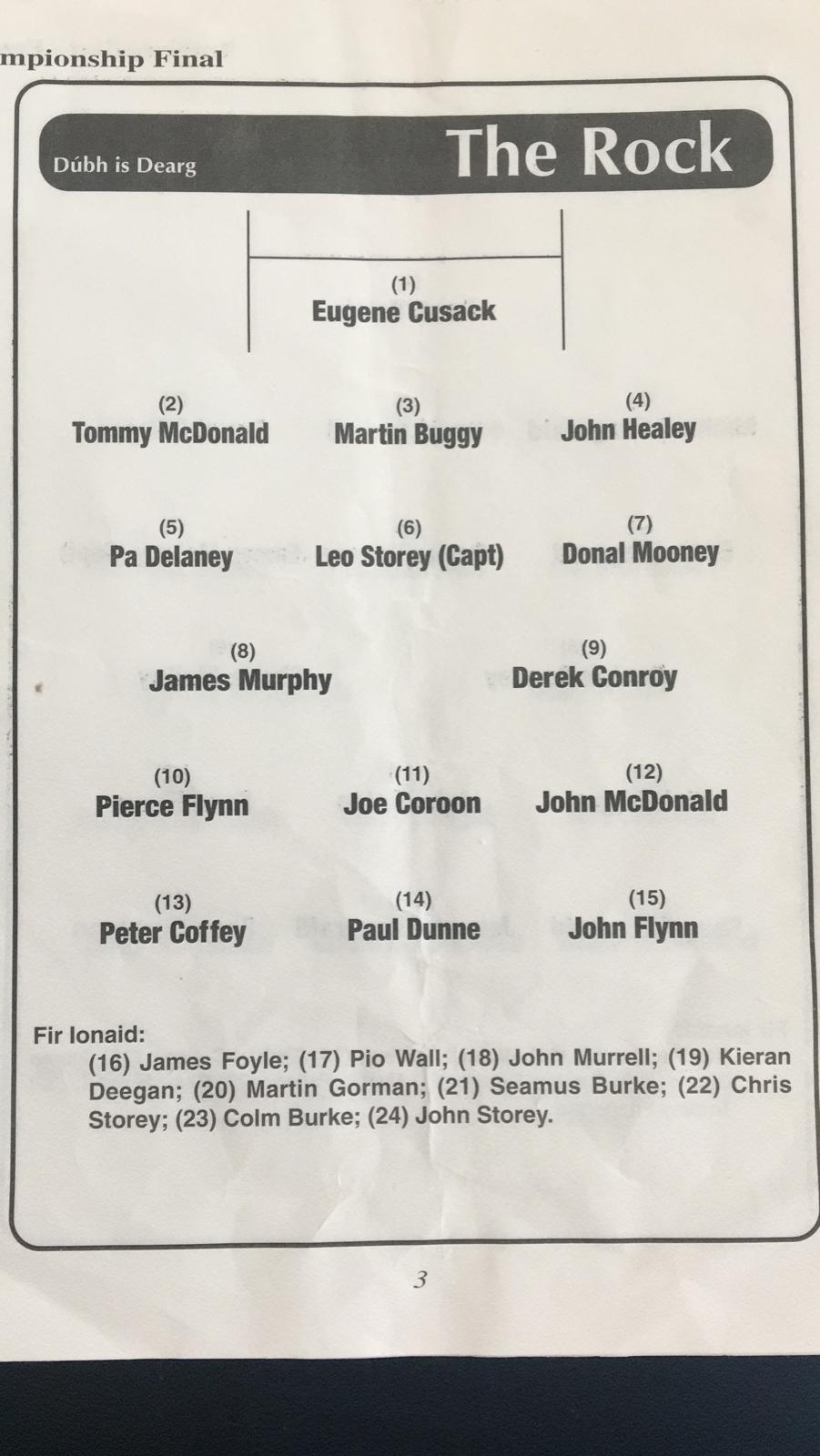 Brian Keyes noted in his Leinster Express report that the switch of Martin Buggy to centre-forward and Leo Storey to full-back made a big difference. The direct running of Derek Conroy was also a feature and with nine minutes remaining a Colm Burke free levelled things up.

The Rock could have won the game in normal time but Paul Dunne saw his late penalty brilliantly saved by Michael Leigh. It was going to need extra time to separate them.

And it was here that The Rock finally broke free. Dunne got a goal two minutes into the new period and there was no stopping them from there as their extra fitness was crucial. 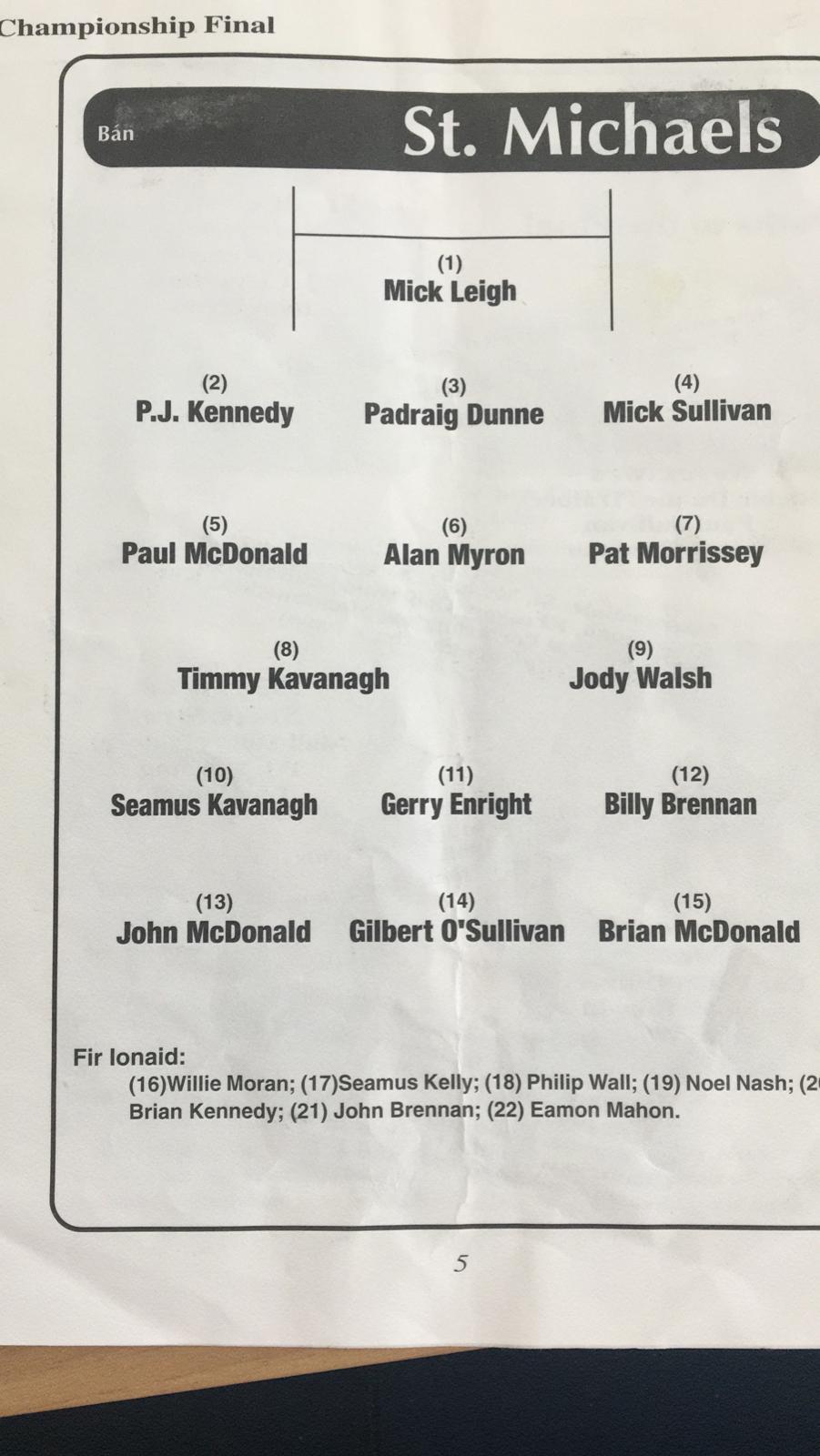 Corroon, Peter Coffey, Dunne and John McDonald all added points as they made a powerful burst for the finish line.

“It was all The Rock in the final quarter,” wrote Keyes, “as their supporters really let their colours fly with their scores greeted with tremendous cheers.”

“Finally the intermediate title rests with The Rock,” was the opening line of his match report as he referenced the “two decades of trying to make the breakthrough to the senior ranks”.

“This was a major win for The Rock,” he added later in the report. “They have suffered some severe setbacks in recent years and in many respects this banishes the memories of ‘93, a final they really should have won (against Killeshin).

“This is a fine young Rock team and among their ranks were two All Ireland minor winners Martin Buggy and Derek Conroy. Both played very well with Conroy in particular outstanding.

“The Rock defence in general was strong and unyielding and it took some special plays from Michael’s to keep them in the game in relation to frees and such.

“At midfield The Rock had the better with Corroon and Murphy making a strong partnership while in attack Paul Dunne, Peter Coffey, Colm Burke and captain Leo Storey played very well.

“All credit to St Michael’s, bringing the match to a replay and extra time. They looked a smaller side but they really got stuck in and played good football despite the terrible conditions.

“Mick O’Sullivan had a fine game at corner back. Alan Myron at centre. Timmy Kavanach at midfield and in the forwards Brian McDonald, Gerry Enright and Gilbert O’Sullivan played very well.”

The Rock would go on to reach the senior final in 1998 and later made a couple of semi-final appearances before being relegated to intermediate in 2013 where they remain today.

By 1997, the name Arles-Killeen was in use and they beat Arles in the intermediate final. They went up and down from senior for a couple of years but have been a senior club in their own right (not as a Gaels set up) since 2004.