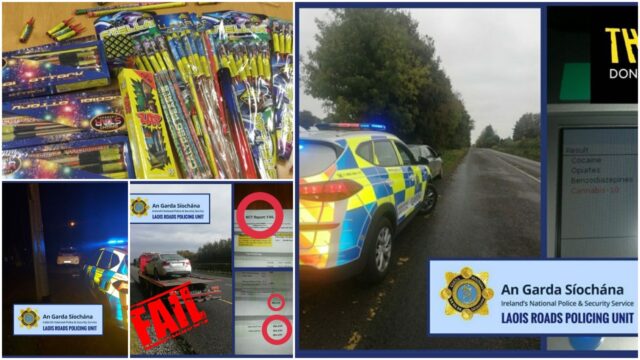 Gardai in Laois have been extremely busy over the past couple of days ranging from traffic offences to seizures of fireworks.

On Monday, Gardai arrested a driver after they turned away from a Covid checkpoint and was subsequently found to be under the influence of cannabis.

They say: “Laois Roads Policing Unit stopped a vehicle after it turned away from a COVID checkpoint.

“The driver was discovered to be driving under the influence of Cannabis after they failed a roadside oral fluid test.

“The driver was arrested and will now have a court appearance to attend.”

On Sunday afternoon, Gardai detected a drive with dodgy brakes going 63km/h above the speed limit on the M7.

They say: “Laois Roads Policing Unit stopped a vehicle which was speeding at 182kph on the M7.

“The vehicle was then discovered to have recently failed the NCT due to major faults with its braking system.

“It also had no tax or insurance in place. The vehicle has been seized for a PSV examination and the driver is heading to court.”

On Sunday night, Gardai arrested a driver in Stradbally after finding them to be under the influence of an intoxicant.

Gardai say: “Laois Roads Policing Unit on a patrol in Stradbally observed a vehicle travelling at speed through the town.

“This vehicle was stopped and the driver subsequently arrested on suspicion of Driving under the influence of an intoxicant.

“Court proceedings commenced in this case.”

While on Saturday, under Operation Tombola, Gardai in Mountmellick seized a number of fireworks.

They said: “A number of searches carried out as part of Operation Tombola by Mountmellick Gardaí to tackle the anti social behaviour and illegal sale of fireworks in the town of Mountmellick.”