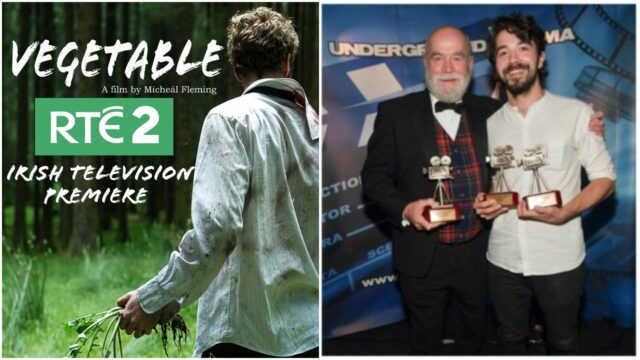 A shortscreen which was shot in the Slieve Bloom Mountains and written by a Laois man has featured on RTE 2.

‘Vegetable’ premiered on Irish TV screens late last night in what is another huge move in the career of a budding Laois writer and producer.

The Swan’s Micheal Fleming wrote and directed the film – but if you missed it last night, fear not.

Micheal has confirmed that it will be available to view on the RTE Player for the next 30 days.

The SwanDive Productions film, which includes a set full of zombies, was shot over two days in the Glendine woods area of the Slieve Bloom mountains.

Michéal explained that the idea for his film while travelling with his ‘better half’ last year.

“We were going around Asia and India and decided to stay away from meat and only eat vegetables.

“We were doing a lot of travelling and 24-hour train journeys and it popped into our heads that we were like zombies, only eating vegetables,” he said.

“The idea came from that but I didn’t get to write anything until a few months later,” he said.

Having filmed a 1916 short production in Laois, Michéal was keen to return to his native county for filming. “We wanted to show off what Laois has to offer,” he said.

Photographs by a local photographer from the Swan inspired Michéal to choose a location in the Slieve Blooms.

“The photographs looked really eerie, so it was a perfect location for what I wanted,” he said.

Around 25 crew members and actors were involved in the movie.

To top off the SwanDive production’s success, Vegetable was subsequently selected as part of the Rome Prisma Film Awards that year.