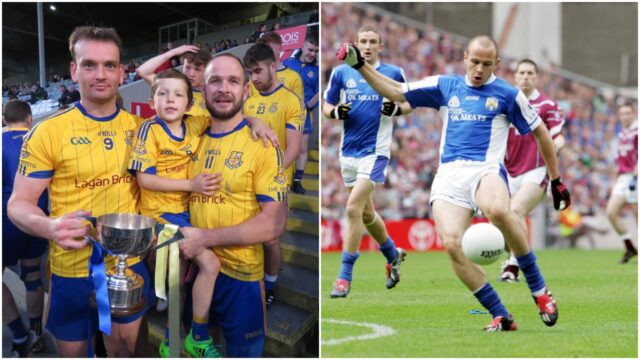 Defender Tom Kelly gets the special treatment as Walsh has compiled a clip of all his best bits in the blue and white.

An incredibly stylish player, the St Joseph’s man played his underage football in attack before becoming a defender at senior county level under Colm Browne.

He spent the entire league and early stages of the 2003 season under Micko playing at corner-back before being released to centre-back at half-time of the drawn Offaly game that year.

That proved a game, championship and career-changing switch. Kelly was exceptional from there on that season and was honoured as an All Star that year as well as with a nomination in 2004.

A great ball carrier and as stylish a centre back as was in the game at that time, he also represented Ireland a number of times in the International Rules and was chosen as Ireland’s best player of the 2005 series in Australia.

He made his debut in 1999 and played 37 times in all, his final Laois appearance in the championship coming in the 2008 All Ireland Qualifier loss to Down.

A serious head injury curtailed his club career a couple of years after his inter-county retirement but he dramatically returned to action in 2017 to help St Joseph’s win the junior ‘A’ football championship.

He kicked 1-3 in the final and would go on to play senior for one final time in 2018 for his club.

This year Kelly was part of the backroom team under fellow All-Star Joe Higgins at St Joseph’s.

The video can be viewed in full by clicking here.