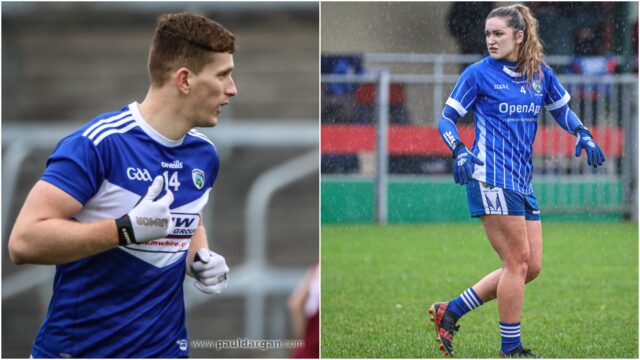 It’s another busy day for Laois GAA with the county’s male and female senior teams both in championship action.

It’s straight knockout for the men, who make the trip to play Longford in the Leinster SFC quarter-final.

While the ladies are also on the road as they head for Clonmel to take on Clare in the group stages of the All Ireland intermediate championship.

We look ahead to both games here.

The game is at 1.30pm in Longford’s Glennon Brothers Pearse Park – though there’s no supporters allowed to attend so planning your journey isn’t an issue.

How can I watch it?

You can watch it here live and in full on the GAA GO website where it’ll cost you €5.

As well as that the LaoisToday Live Blog will be bringing you updates and observations from 1pm from Longford while Midlands 103, with Jack Nolan and Chris Conway, will be providing live commentary. There will also be updates on RTE Radio.

What way are Laois shaping up?

As with a lot of counties this year, it’s hard to know. They were very poor in their first league game back against Westmeath and for long spells against Fermanagh they weren’t overly impressive either.

The thrilling end to that game that saw Laois hold onto their Division 2 status will have been a great boost to morale though captain Kieran Lillis is suspended following a red card in that game and his midfield partner John O’Loughlin went off injured in the first half that day.

But they’ll surely have benefitted from two weeks of focused preparation since, giving Mike Quirke and his management team a chance to work out their best starting 15. They used 23 players in the two league games with Colm Begley and Paddy O’Sullivan also expected to be in contention.

How are Longford going and what were they like the last couple of years?

Longford’s 1-9 to 1-7 win over Louth last weekend was only their second game as they opted to concede their final league fixture to Cork. They had previously lost 2-14 to 0-12 away to Derry.

Longford drew with Kildare in last year’s Leinster championship after extra time and though they lost the replay, they recovered to beat Carlow in the Qualifiers and then lost to Tyrone by four points.

In 2018, they had a first championship win over Meath in 36 years before losing to Dublin the Leinster semi-final. They then went down to Kildare by three points in the Qualifiers.

What Longford player should we watch out for?

Big midfielder Darren Gallagher from Granard hit 1-3 in last week’s win over Louth and is back in the Longford colours this season having missed the 2019 championship as he was in America for the summer.

Highly-rated and a frequent scorer, he seemed to be struggling with injury last week but if he’s at his best then he could cause Laois problems.

Today’s game is the 16th championship meeting between the sides. Laois have won 10 of the previous 15 games with Longford winning five – most famously the 1968 Leinster final.

Longford were also victors in 2012 when the sides last met in Pearse Park, though Laois were comfortable winners when they met most recently in 2017.

What are the teams?

From the dramatic win over Fermanagh two weeks ago, manager Mike Quirke makes two changes – one of which is enforced.

Captain Kieran Lillis is suspended and his absence sees Danny O’Reilly move to midfield where he will be partnered by John O’Loughlin who has recovered from the injury that saw him come off against the Ulster men.

That means Eoin Lowry has moved to wing forward with O’Dempsey’s Mark Barry coming into the team at centre forward.

The second change is in defence where Stradbally’s Eoin Buggie comes into the team at wing back with Ballylinan’s Alan Farrell dropping out of the side.

The full back line is an all-Graiguecullen affair where Trevor Collins and Mark Timmons are joined by Brian Byrne – who is one of three championship debutantes.

The second is goalkeeper Niall Corbet who becomes the first Clonaslee player since Darren Rooney in 2009 to play championship football for Laois.

While the third player to make his debut is Seamus Lacey from Ballylinan who’s dad Eamon also played for Laois – making them one of the rare number of father and son duos to have represented the county.

And in a first for Laois, manager Quirke has also elected to name his substitutes which are a mix of youth and experience – but do not include Colm Begley or Sean Moore who are injured.

Sean Hurson from Tyrone is the man in the middle. He last took charge of a Laois game in March 2019, when they lost to Westmeath in Mullingar in Division 3 of the league.

He was in action last weekend when he officiated Armagh v Derry in the Ulster championship while among the big games he has refereed were last year’s All Ireland Super 8 game between Kerry and Mayo in Killarney and last year’s Leinster final between Dublin and Meath in Croke Park.

Laois are the 8/13 favourites with Longford at 15/8 and the draw at 15/2. If it’s a draw after normal time then two 10-minute periods of extra time will be played. If it’s still level then it’s on to a penalty shootout.

It’s in Clonmel at 1pm, though like all games at the moment it’s completely behind closed doors so supporters can’t attend.

Can I watch it online?

The game is being streamed live on the Channel Clare YouTube page which you can find here. It’s free of charge. We’ll also be providing updates on our Live Blog.

From Laois’s last game which was a fine win over Sligo last weekend – there is one change.

Teenager Leah Tarpey, who sparkled as a half time substitute last weekend, comes into midfield in place of Mags McEvoy.

There is also one positional switch as Mo Nerney has swapped places with Sarah Anne Fitzpatrick.

They are of a similar enough standard to Laois though do they have the upper hand in recent games between the counties.

They were towards the bottom of Division 2 when the leagues were cancelled back in the spring (Laois were in the middle of Division 3) and were narrowly beaten by Kildare in the opening round last weekend.

They reached the All Ireland quarter-final last year where they lost to eventual champions Tipperary by two points.

Who are Clare’s main threats?

Niamh O’Dea, who scored 1-8, when the sides met last year in the championship is a quality player who also lines out with the Clare camogie team.

Former Ireland underage soccer player Chloe Moloney, who has played with the brilliant Peamount Utd side, scored a goal in last week’s loss to Kildare and is worth keeping an eye on, as is Caoimhe Harvey up front.