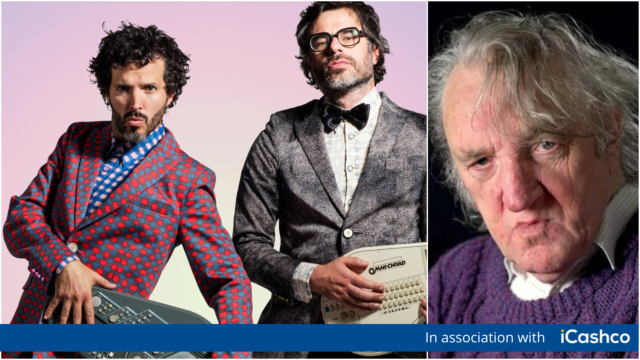 When a pub on the main street of the county town has been in the same family since the 1860s, it’s bound to have welcomed some great characters through its doors over the years.

Though they’re currently closed now due to the Coronavirus restrictions, PJ and Niamh Kavanagh could chat all day about some of the personalities that have been in Kavanagh’s Bar and Venue.

High-profile musicians, comedians, sports stars, politicians and even a young Ed Sheeran – before he’d made the big time – have spent time there.

“It’s probably one of the best educations you will get in terms of dealing with people,” said PJ, who is the fourth generation of his family to run the business having taken over in 1999.

“You meet everyone. You could write a book,” he laughed.

Chatting recently on the LaoisToday Podcast, he recalled working in the premises from a young age as well as memories of his parents running a pub in the old cattle mart on the Timahoe Road and his father having a travelling van shop that would go around the county selling groceries.

“Huge amount of characters after going through the place. The days (famed sports writer) Con Houlihan would arrive down to O’Moore Park for a match, there would be fierce excitement.

“I was behind the bar one day and this dishevelled looking man walked into the pub and ordered a brandy and milk.

“I was probably about 15 at the time and I’d never heard of a brandy and milk before. I wasn’t too sure whether to serve him or not and I went back in to the kitchen which was directly behind the counter at the time.

“I said ‘there’s some fella out here looking for brandy and milk and I don’t know whether I should serve him or not.

“And the minute I said brandy and milk the parents were like ‘that’s Con Houlihan, we may go out to him straight away’!

“It was the old main Dublin to Cork and Limerick road. Literally teams stopping after the All Ireland and they might stop in for a few pints on the way back – teams or supporters. Every cup in the country has been through the place, even up to nowadays.”

Having done up the premises in 2000, PJ started the comedy club in 2002, which at the time was only the third in the country. His first event was a roaring success, though he experienced the other side of things pretty quickly too.

“The first one was Flight of the Conchords on a Thursday night and it sold out in a day,” he said.

“I was like ‘this is so easy – I should have done this years ago’.

“The next one was on two weeks later and there was three people at it! What a disaster – back down to earth with a bang. Definitely a learning curve there.”

The Flight of the Conchords, a New Zealand comedy duo, have since gone to have on their own show in America and “are multi-millionaires now”.

“All the comedians went through weren’t quite as successful unfortunately,” he laughs.

Given the doors have been closed for so long this year – with the exception of a brief spell in September-October, they’d be forgiven for being frustrated with the decisions taken in relation to the industry. And while they are, they have seen the funny side of it too.

“Everyone saw the videos from Temple Bar the week before Paddy’s week and they’re up standing on tables and drinking and singing. A lot of people that aren’t regular customers of a pub would have the impression that that is pub life full stop.

“We open at half ten in the mornings, I can guarantee you there is nobody singing on tables. They’re not singing on tables anytime unfortunately as much as you might like to have a pub in the middle of Temple Bar. It just doesn’t happen.

“Personally I like to have a pub that is safe, that people are going to enjoy themselves in and want to come back.

“When you talk about people who are regulars in a pub, we have the four women that come in after mass for a coffee.

“When we re-opened the pub, they were the first customers back in. It wasn’t the lads in for pints. It was the four women in for the four lattes and the chat and delighted to see each other.”