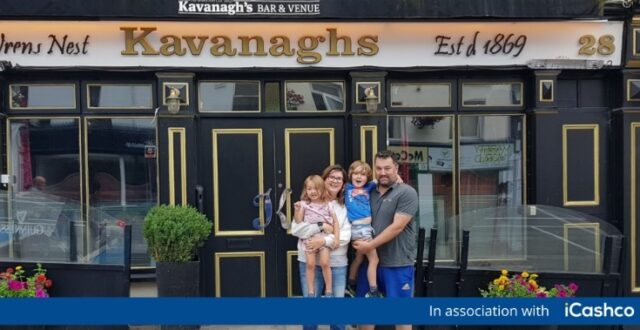 The owners of one of Portlaoise’s oldest pubs have described the experience of losing almost an entire year’s custom as well as the challenges facing the industry going forward.

PJ and Niamh Kavanagh run Kavanagh’s Bar and Venue on Main Street in Portlaoise, a business that goes way back to the 1860s, with PJ the fourth generation of his family to act as proprietor.

Having taken over the pub from his parents in 2000 and overseen an entire refurbishment and introduction of many new elements, he says that their ongoing closure has left them way behind.

“The problem in business is that everyone has ambitions to move on,” he said when speaking on the LaoisToday Podcast, which will be available to download on Friday.

“You have your targets set for the year. Ours are well and truly gone for this year and probably for next year as well. So we are probably two years behind at least where we should be.”

Pubs were the last sector to be allowed open in the autumn and though Kavanagh’s had served food prior to lockdown, they chose not to open initially when restaurants were permitted.

They did later introduce a food element and then had a couple of weeks of business before the country moved to Level 3 restrictions which meant they could only have 15 people on their premises but only outdoors.

As they await announcements on whether they will be allowed to re-open before Christmas, PJ and Niamh spoke of their frustration at how the pub sector was treated – but also the significance of opening again, even for that short spell.

“It was very important that we got the opportunity (to open),” says PJ, “because there was no light at the end of the tunnel for a long time.

“You’re trying to look after a business that you’ve built up all your life and through no fault of your own you can see it going and you’ve no answers and don’t know where it’s going to go.

“We’d like to think we diversified  – comedy, music, parties. Changed the pub around to be more adaptable to sports, put in coffee menus, did a bit of food during the day.

“We kind of said, if music doesn’t work, or comedy didn’t work we have something else in our back pocket to use it. But all of a sudden, everything was gone.

“Starting out you thought this would be over in a month or two but then the reality kicked in that this was going to drag on and on. And there was no light at the end of the tunnel.

“Even the weekend that we closed, the week after we refunded €25,000 in tickets for gigs that were sold. And that was just for gigs taking place within six weeks.

“Now we’re in November heading into Christmas (but) I’d be hesitant to reschedule any gigs until next summer at the earliest.

“The initial feeling was that you were not being trusted. There are rogue traders in every industry but we just get the feeling that ‘you’re great lads but we don’t trust you to operate your business in a safe way’ and that is the bit that is the sickener and it’s still there.”

“You were hoping you would get an opportunity and the Government would see we could roll out our business (safely),” says Niamh.

“But unfortunately as the weeks and months rolled on, the Government really showed that they didn’t trust our sector.

“We were so delighted (to get open again). To even open the first day, you were like ‘if I can get the second day, the third day’.”

“The main thing is you get the chance to open and keep a bit of life in the building,” added PJ.

“Your building stagnates, your trade stagnates. If your pub is based on regular customers, those habits will have changed for a lot of people.

“I can’t see some of them coming back – their lifestyle has just changed. Whatever about being closed for two or three weeks, eight months (is a long time).”

“Some people were very curious to try it out and when they did and saw how safe it was, they were coming back for the next time and coming back with other friends to try it out,” said Niamh of their first re-opening.

“I do personally see that it will become more of a luxury item to go out. You will have to plan it.”

PJ and Niamh Kavanagh are the latest guests on the LaoisToday Podcast where they chat about the history of their pub, the characters that have been through the doors over the years and their views on the future of the industry and Portlaoise town centre.

The podcast will available to download on Apple Podcasts, Spotify and Soundcloud on Friday morning.