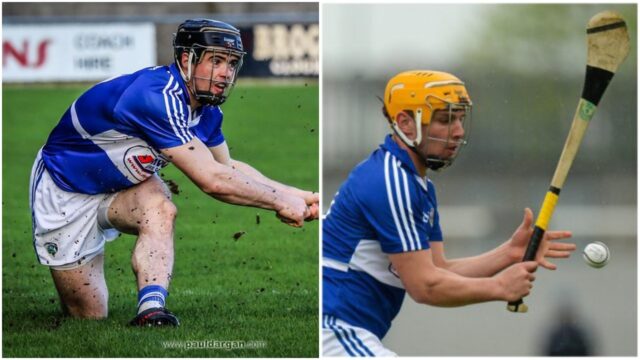 There has been a boost for the Laois hurlers as two key forwards have committed to the panel for 2021.

Ballinakill’s Cha Dwyer and Borris-Kilcotton’s PJ Scully are both understood to have agreed to join Seamas ‘Cheddar’ Plunkett’s squad.

Dwyer was part of the Laois squad in 2019 and played a key role as Laois reached their first All-Ireland quarter final in 40 years.

But he initially opted out of Eddie Brennan’s set up in 2020 and was to go travelling before the Covid-19 pandemic ended that.

It is understood that he wished to return to the fold but was not selected – however, he has been recalled now.

Meanwhile, Borris-Kilcotton sharpshooter Scully has not played for Laois since midway through the 2019 season.

While Plunkett’s management team has not yet been confirmed, it is understood that former Laois football manager John Sugrue is on board as a physio.

Dwyer and Scully will have to wait a little longer to join the rest of their squad members in a collective sense as the GAA pushed back the start of collective training due to the Covid-19 situation.

Training was due to start on January 15 but in a letter to county secretaries on Tuesday morning, GAA director general Tom Ryan said that the decision was made due to the current rise in infection rates of Covid-19 and the increased risk of community transmission.

Ryan stated that in addition to this move, club and county gyms must also stay closed until further notice.

“As you are aware the current Level 5 restrictions in the South will run until January 31 at which point the GAA will review the current situation and any further advice in this context will be provided,” Ryan’s letter adds.

“Finally, it is important to note that outdoor gatherings on GAA property are not permitted – the only current exemption to this is for walkways (which may stay open for use by the community with social distancing in place) and for clubs registered for the ‘Ireland Lights Up’ walking initiative.

“I fully appreciate the frustrations these additional restrictions may place on our inter-county players and management teams,” the DG writes.

“However, the safety of everyone in the game and indeed the broader community has to be our primary focus.

“It has never been more important for our players, coaches and officials to follow both the Government guidelines and our own provisions around training.”

This could also mean that the start of the Allianz National hurling and football leagues are pushed back.