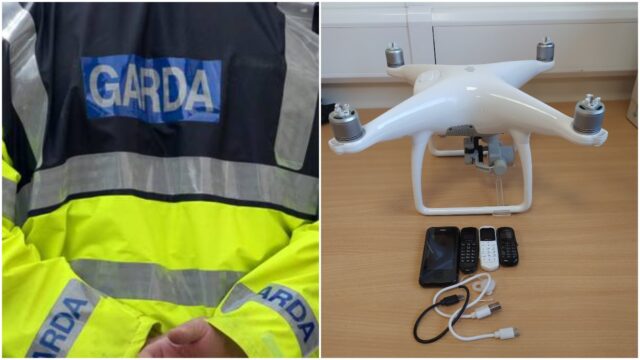 Gardaí have arrested a man in his 20s in Portlaoise following the seizure of a number of items recently.

They discovered a drone along with a package containing mobile phones, chargers and quantities of crack cocaine, cocaine and cannabis, with a combined estimated value of €5,000.

The discovery was made at St Johns’ Square near Portlaoise Prison.

This seizure was made as part of an ongoing investigation by the Laois Offaly Divisional Drugs Unit at around 4pm on Wednesday, January 6.

The man was arrested at the scene and is currently detained under Section 2 of the Criminal Justice (Drug Trafficking) Act, 1996, at Portlaoise Garda Station.

He can be held for up to seven days.

Two cars were also seized by investigating Gardaí during the operation.

The man in question is due to appear before Naas District Court this morning.

SEE ALSO – In Pictures: Some much needed fun as first snowfall of 2021 hits Laois