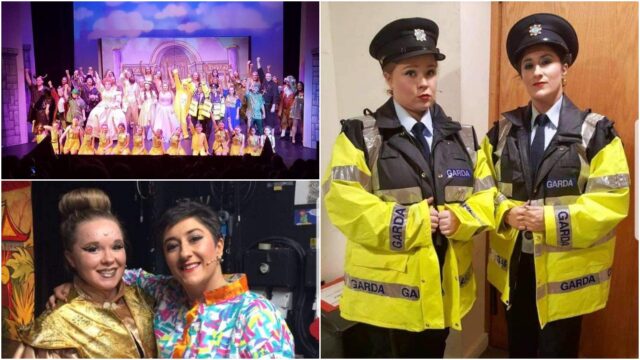 Normally at this time of the year, various local pantomime groups around the country would be in the thick of their schedule of shows or in the final hectic few days of preparation.

For the Portlaoise Pantomime group, this year would have been their 37th year performing.

The Coronavirus pandemic has put paid to that until at least next year and speaking on the recent LaoisToday Midweek podcast, committee members and performers Vikki Byrne and Ciara Dollard chatted about how putting on a virtual performance would have been such a challenge and why the ‘panto family’ can’t wait to get back together again as soon as it is safe to do so.

“There is a panto group up the country putting on a virtual panto and when I heard that I just thought how and fair play to them because that must be the biggest task to undertake,” said Vikki.

“Panto is just the number of people, it’s the rehearsals, it’s everything and then when you get on stage it really does elevate things.

“As you say, you get an audience and you have to pause for applause, pause for laughs, maybe comedic timing comes into it.  There’s so many elements of a live audience. The Olympia as well actually put on a virtual panto this year too and I suppose it’s like anyone in the arts.

“Any musicals, panto’s, comedians, anyone in that genre, that has gone virtual, you are just trying to make the best of the situation that you have at hand.  It does affect… the energy that you feed off a live audience is like no other.  It must be incredibly difficult.  Apart from the live element.

“The rehearsal to maybe have to do a virtual rehearsal and time delays and connections.  So, I mean, anyone that has done that, hats off to them.

“In terms of ourselves, I suppose we are really hoping that this time next year we will be OK, we will be good to go.

“You hear the talk of people saying that by December this year we should be back to some semblance of normality and we would usually kick off in October.

“So, it would mean that we would maybe only need to be virtual for a little while, if at all.  So, I think we’re all holding out hope that for 2022, we will be back on stage in the Dunamaise.”

“It is a family unit,” said Ciara. “The things you go through together, performing on stage,  there’s nothing really that compares to it.

“The bonds you form with people.  I would have to say with people that you wouldn’t have generally crossed paths with otherwise.

“For example, even Vicky and myself.  I don’t know if we have ever crossed paths had it not been for panto and now we’re living in each other’s ears half the time when we’re allowed to.

“So, definitely, as you said a real family bond.  You can’t describe it until you have been part of it I think.”

“It’s just the atmosphere and you hear people say things like oh it’s like one big giant family and you think what a cliché, please… but it’s so true and you live in each other’s ears,” added Vikki.

“For the panto, we do 11 shows in the week, Saturday to Saturday and I mean, we don’t see our families really in January and for the week of the show, we do not see anybody but each other and you’re going how are you not sick and tired of these people but you’re not.

“It’s so bizarre because if you spent that much time with your own family, you would probably kill half of those.

“It’s just this really bizarre vibe and everyone is there to help each other … it’s indescribable how everyone just bonds and as Ciara said, people that necessarily you may have never even thought you would get on with.”

You can listen to the full show, presented by Paul Downey, on Soundcloud below or on Apple Podcasts or Spotify.