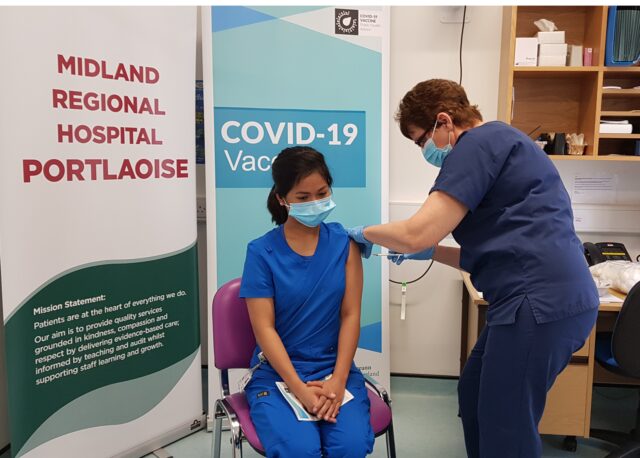 The total number of people in hospital with Covid-19 continues to rise sharply, the latest figures show.

A total of 1,582 people are in hospital across the country as of this morning.

That represents a 24 hour increase of 79. 104 new admissions were made with 26 discharges.

There are now 146 people in ICU – 21 new admissions and just one discharge.

There is an additional 125 non-Covid patients in ICU which means the total figure is 271 – which leaves just 32 beds available in the entire country.

The latest figures from Portlaoise show there are 16 patients in the hospital with Covid-19.

There are three people in the hospital who are in ICU.

Meanwhile, an MEP has raised concern that some EU countries are getting a higher proportion of vaccine than others.

Although official figures have not been published, it is believed that more than 35,000 people have been vaccinated in Ireland so far.

Fianna Fáil MEP Billy Kelleher has said that the European Union Commission has a number of ‘serious questions’ to answer in relation to its Vaccine Purchase Programme.

Kelleher was commenting, as it was alleged that some Member States were obtaining higher levels of certain vaccines relative to the agreed distribution agreement and that decisions regarding which manufacturers to enter into advance purchase agreements with was being influenced by certain larger Member States.

He said: “In an article in the German news magazine, Der Spiegel it is alleged that Germany will receive a disproportionate amount of the recently approved Moderna vaccine, and that France and Germany will also receive a larger proportion of the Pfizer BioNTech vaccine.

“What is also deeply concerning is the allegation that larger Member States have attempted to influence the overall buying strategy with France putting pressure on the Commission to buy the French-produced Sanofi vaccine, with the German government equally favouring the German-produced Pfizer BioNTech vaccine.

“Of major concern to me is the allegation that Germany has struck a deal, separate to the Commission agreement, to purchase its own supply of the Pfizer BioNTech vaccine.

“This simply flies in the face of the concept of European solidarity in my opinion.

“All of these allegations are quite serious, and require urgent answers. There may be legitimate reasons for these things happening but at this stage, I am worried that Vaccine Nationalism is damaging the overall EU response.

“If Member States other than France or Germany attempted to do some of the things alleged in this article, there would be rightly serious repercussions.

“I really hope it is not the case that, in the eyes of Germany, France, and the Commission that, ‘All Member States are equal, but some more equal than others’.”