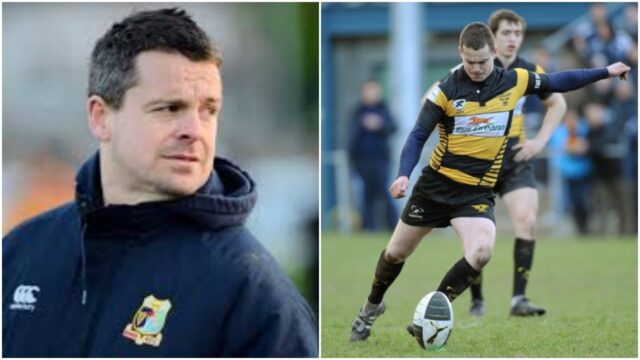 A Laois man has been appointed as a ‘kicking consultant’ with Welsh Pro14 side Cardiff Blues.

Portlaoise native Alan Kingsley holds a similar role with The Dragons, which he took in 2018, and also Biarritz in France.

According to the Irish Independent, Kingsley will mainly work on individual skills with the Cardiff academy backs.

A former out-half with Young Munster and Garryowen, Kingsley is one of the finest rugby players to ever come out of Laois.

He came up through the Portlaoise ranks, making his first team debut as a teenager and playing in a Towns Cup final in 2001 when he was still in secondary school.

They lost that final but he was there two years later when they got their hands on the coveted trophy for the first time in over 20 years.

He moved to Garryowen in Limerick where he spent a couple of seasons before then switching to their city rivals Young Munster.

His career then went international when he accepted an invitation to play with the University of Western Australia in Perth.

Initially he was only supposed to stay for three months but he stayed Down Under for over three years.

There, he played against the likes of David Pocock and Nick ‘The Honey Badger’ Cummins and in that first season he helped them win a Western Australian title for the first time in almost 40 years.

While there he also had a role with the academy of Australian Super Rugby franchise Western Force before moving home to accept a position as head coach with Navan who were in AIL Division 2C.

He guided them to back to back promotions while also combining roles with St Mary’s in the Leinster Schools Senior Cup, the Leinster Academy and with the Dragons at the time.

Speaking to the Irish Independent, Kingsley said: “It’s really exciting to get the opportunity to work closely with some of the younger players at Cardiff Blues and try to bring on their skills around kicking.

“It’s really exciting and it’s always an honour to be involved with massive clubs. Cardiff Blues are a huge name and are a very competitive in both Europe and the PRO14. It’s really nice to be around the system.

“You see more and more clubs around Europe either hiring a consultant to come in or, in some cases, hiring a full time coach for kicking.

“There’s definitely an emphasis put on the kicking game and it’s a role that’ grown massively over the last two or three years. But it’s still a niche role at the moment.”