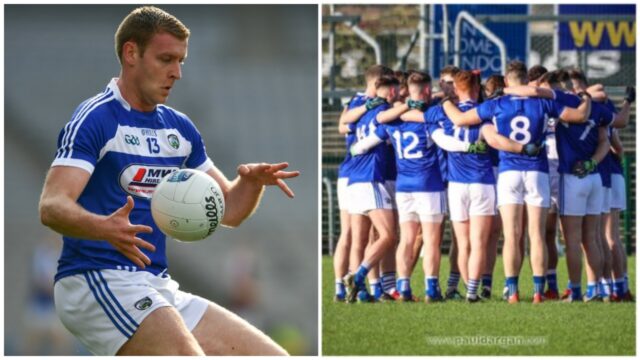 The Laois senior footballers have received a pre-season boost as one of the county’s highest ever scorers has returned to the panel.

Arles-Killeen ace Donie Kingston, who is behind only Ross Munnelly on the all-time list of Laois’s top scorers, has committed to Mike Quirke’s panel for the 2021 season – after opting out last year.

Kingston, along with younger brother Paul, decided not to play for Laois in 2020 – with Paul returning to the fold in October after the Covid-19 enforced shut down.

And now 30-year-old Donie has followed suit – with manager Mike Quirke confirming he is not the only one.

Portarlington duo Colm Murphy and Sean Byrne, who played prior to Covid-19 last season but then opted out when games resumed, are also back.

Emo’s Jack Owens and Ballyfin’s Sean Moore have decided not to return to the panel for 2021 after being called up in October last year – but Emo’s Finbarr Crowley and Portlaoise’s David Seale, who were also called up around the same time, have remained with the panel.

Laois will be without the services of one of their longest serving players following the retirement of Denis Booth – but all of the other elder statesmen of the squad are back for 2021.

Mark Timmons, Colm Begley and Ross Munnelly have all committed to the panel once again.

For Munnelly, who turned 38 in December, it will be a 19th consecutive season representing the Laois footballers since his debut in 2003 – meaning he will remain the only active player in the province, outside of Dublin, to hold a Leinster winners medal.

While in further good news, Ballyroan-Abbey’s Marty Scully and Portlaoise’s Benny Carroll are also back after missing the end of last year through injury.

Speaking about the return of Kingston, manager Quirke said: “Donie Kingston is back training as part of the senior football squad, as is the likes of Finbar Crowley, Colm Murphy and Sean Byrne.

“The lads are all training away on their individual programs and trying to get in their running as best they can.”

Kingston and the rest of the squad will have to wait a little longer to meet up as a group collectively as the GAA pushed back the start of collective training due to the Covid-19 situation – until the end of the month at the earliest.

Training was due to start on January 15 but GAA director general Tom Ryan said that the decision was made due to the current rise in infection rates of Covid-19 and the increased risk of community transmission.

Manager Quirke says his squad are happy to work away individually and will return to the field only when it is safe to do so.

He said: “We’re happy enough with the progress people are making but we’re all just waiting to see how everything plays out in the next couple of weeks.

“We’re hoping to get back on the field as soon as possible, when it is safe to do so.”

At present, Laois are set to get their Division 2 National League campaign underway on February 27/28 with that competition concluding at the start of April.

However, the public health situation involving Covid-19 may see the season be restructured if it does not improve.