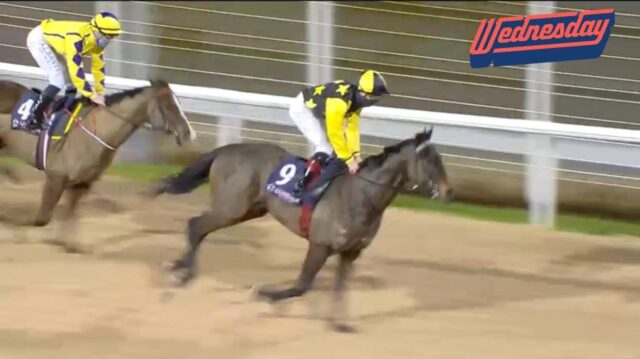 There was a huge Laois involvement as a horse called Slade Runner romped to its first ever win in Dundalk last night.

Winless in 14 races, Slade Runner was purchased by the Portlaoise Racing Syndicate recently and this was just its second run for Laois trainer Kieran Cotter.

Originally bought for €25,000, the syndicate, which is made up of 12 individuals organised by Kieran’s daughter Mary Cotter, managed to purchase the horse for €1,200.

Slade Runner’s first attempt for his new owners ended in failure but he was sent off the 2/1 favourite and won.

Claiming the first prize of €6,000, the four-year-old saw off Annabella Rock by half a length.

Speaking to IrishRacing.com afterwards, trainer Cotter was delighted that Slade Runner got off the mark.

He said: “That’s his second run for us. He hadn’t quite enough pace over five the first day but he toughed it out well there today.

“He was picked up very cheap and my daughter Mary, who led him up, put together a syndicate so I’m sure they are all delighted in Portlaoise.

“He’ll stick to six and he didn’t shirk it in the finish.”

The Cotter’s have begun work to expand their stables at Clonanny – an area between Portarlington and Monasterevin.

Kieran said: “We still have 18 in and we’ll keep busy over the winter.

“We have some new recruits to bring out for the Flat season. We only have a couple of two-year-olds but we have a few nice three-year-olds to come out.

“We will have another ten stables in two weeks’ time and have put down foundations for twenty, so we will try to fill them now.”