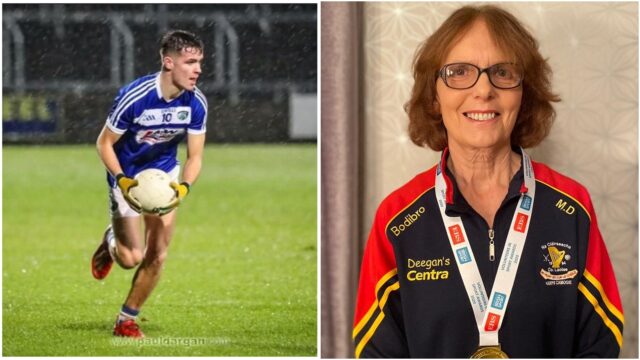 Coffey named on GAA U-20 football team of the year

Laois U-20 football captain for 2020, Ronan Coffey, has been named on the GAA’s team of the year.

The Portarlington wing forward was instrumental as Laois reached the Leinster U-20 final for the second year running.

Laois defeated Westmeath in the quarter final last February – but only

That game went all the way to extra time and then penalties where after a penalty shoot-out with captain Coffey converting one of those .

Coffey scored a point that night and added four more in the Leinster final but Laois were beaten by ten points by Dublin last March.

The wing forward returned to his club then where he has helped Portarlington reach the championship semi final against Ballyfin – a game which is yet to be played.

There isn’t a huge amount of GAA news to report these days but one thing that caught our attention in the regular transfer listings from the Leinster Council were players from Dublin clubs moving to Killeshin and Arles-Killeen.

After a few enquiries, it turns out both are highly-rated goalkeepers. Ciaran Bizzell has transferred to Arles-Killeen from Raheny, where he played in goals in the senior championship as recently as 2019 alongside the likes of Dublin senior players Brian Fenton and Brian Howard.

Bizzell, who was briefly on the books with Drogheda Utd as a goalkeeper, has also played with Whitehall Colmcille and O’Connell Boys GAA clubs in Dublin.

Isaac Tallant has transferred to Killeshin from Ballinteer St John’s. He has been in IT Carlow in recent years and has played soccer with Killeshin in the Carlow League. A highly-rated goalkeeper he is now also a Killeshin GAA player.

Both Arles-Killeen and Killeshin currently have two of the longest-serving goalkeepers in Laois club football in Mick Leigh and Shane Coakley respectively.

The other transfer of Laois interest in the Leinster GAA transfer list (which only details transfers between Leinster counties) is that of Dale Phelan from Ballyroan-Abbey who has moved to Meath club Bective.

There are some awards that you simply can’t argue with. And one of these is the recent news that Harps camogie stalwart Mary Donohue has received national recognition for her dedicated work with the club.

Having been involved with all sectors of the club over the years Mary is currently the manager of the U-6, 8s and 10 camogie teams at Harps.

Despite her own children being grown up, Mary turns up every week to give her all to training the young girls in the club. She is involved in every aspect of the Harps camogie set-up, from sitting on committees to organising blitzes and bringing children to matches all over the county.

“She is a fantastic asset to the club and has managed to engage other parents to help out at all levels within the club, particularly with underage teams. Harps camogie wouldn’t be the same without Mary and she will be honoured this week at the special virtual awards ceremony,” said a statement from the organisers.

The Volunteers in Sport Awards were created to champion the contribution, commitment and dedication of the army of 450,000 volunteers across the country who go above and beyond by giving their time to Irish sport and physical activity each year. These volunteers dedicate some 37.2 million hours of volunteering across the country’s 13,000+ sports clubs and associations every year.

The awards were streamed live on the Federation of Irish sports Facebook page last week.

A former O’Dempsey’s footballer has been appointed as manager of Offaly club Ferbane.

Declan Cryan, who won a Leinster junior title with Laois in 1993, has been named as Ferbane’s new manager, taking over from former Laois boss Sean Dempsey who has moved on to Ballinteer St John’s in Dublin.

Dempsey guided Ferbane to the Offaly title in 2019 while Cryan, a teacher in Rathangan, has been over the Kildare Vocational Schools team and previously guided Maynooth to a Leinster intermediate title.

Former Portlaoise manager Malachy McNulty is back in charge of Rhode having guided them to last year’s title.