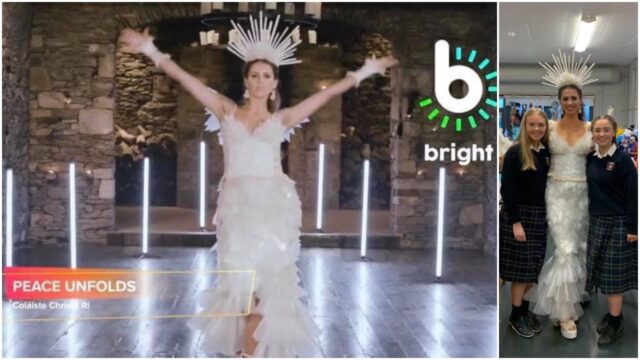 Peace Unfolds from Scoil Chriost Ri in Portlaoise, were named winners of the Enterprise Award.

This prize is awarded to an ambitious and innovative team who have promoted and canvassed for support across social media and in their community.

Their dress was was born of two main concepts. They wanted to use non recyclable folders whilst creating a design which would help spread a message of peace and unity.

Their reason for combining both hard and soft materials was to show how contrasting things can work very well together.

Scoil Chriost Ri paid tribute to the girls for their fine win.

“This prize is awarded to an ambitious and innovative team who have promoted and canvassed for support across social media and in their community.

“The girls have worked so hard on their Instagram account with regular updates and behind the scenes sneak peeks!

Their dress was created to raise awareness and promote changes in the animal cruelty crisis.

Both teams worked under the eye of Ms Jayne Kelly and they are still in the running for RTE Audience Choice Award.

Grainne McCaul, of Peace Unfolds, explained prior to tonight’s final how the separate award works.

She said: “Voting is currently opened from Monday to Friday on app.junkkouture.com for the RTE audience choice award.

“The winner will be announced at 3pm on Saturday, on the Stephen Byrne show on RTE 2FM. Any votes for our designs ‘Peace Unfolds’ and ‘Canine99’ would be greatly appreciated.

“We appreciate all the support we have gotten this far, this is the last stretch of the competition and we need your support now more than anything.

“If everyone could follow this Junk Kouture link, log in/register and go to the south east region and vote for our dresses ‘Peace Unfolds’ and ‘Canine99’ every day this week.

“If you wanted to earn extra votes for Fridays super votes the ‘magic words’ will be posted on our Instagram accounts. @peaceunfolds_jk20 and @canine_99jk.”