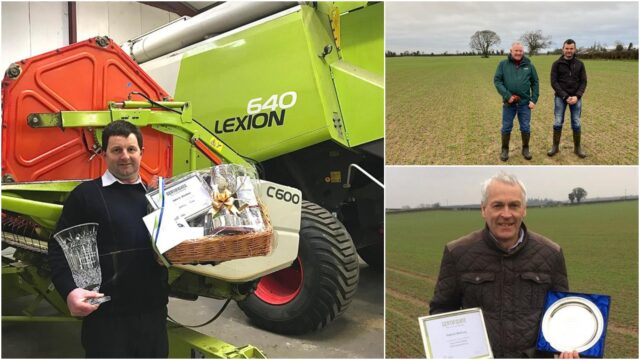 The fourth generation farmer from Ballykillane outside of Portarlington is among 12 suppliers honoured for producing top-class native Irish grain.

“Rotation is key. We’re always trying to build fertility in the soil as we’re in continuous tillage. 2020 wasn’t a great year as drought got us very early on.

“Yields were poor and were down about a half tonne an acre on 2019 levels. But thankfully the quality was good and price was better than previous years. ”

As well as tending to several hundred acres, John and his family also run a hardware and electrical contracting business which employs over 130 people. Currently under construction is a 25,000 sq ft hardware retail store.

Glanbia Ireland Chairman John Murphy congratulated the growers whose excellence and attention to detail are recognised as central to the exceptionally high standards in the industry, as evidenced at the latest awards. He looks forward to a promising year ahead.

“Grain farmers across Ireland continue to produce extremely high quality grains, albeit in very challenging weather conditions over the past number of years.

“2020 was no different with 60% more than average rainfall and high winds wreaking havoc in the south and south east, particularly in August. Despite all of this, our award winners and their fellow growers excelled and have raised the bar even further this year.

“Production was down an estimated 18% nationally in 2020 but the outlook for 2021 looks promising. Forecasts look good, prices have increased and there’s a confidence that markets have strengthened and hopefully that the trend will continue,” he said.

The expert nutritional, R&D and sustainability team at Glanbia Ireland’s Plant Hub are continuously innovating and examining more efficient, environmentally-friendly and healthier ways of feeding the human and animal population.

Head of Strategic Alliances at Glanbia Ireland Tom Finlay said: “Glanbia Ireland is the largest buyer and user of native Irish grains. Our gluten-free oatmeal base doubled in volumes in 2020, based on 2019 intake.

“We are expanding our value chain to include a range of oat flour which is used in a number of nutritious applications. We will bring a range of quinoa offerings to market and these will include flakes and flour. We’ve also introduced a range of organic oatmeal this year,” he revealed.

Also among the Glanbia winners were the Brennan family from Barrowhouse who won the seed wheat category while Patrick McEvoy from Kilberry, Athy, just across the Laois border was the winner of the green feed wheat section.