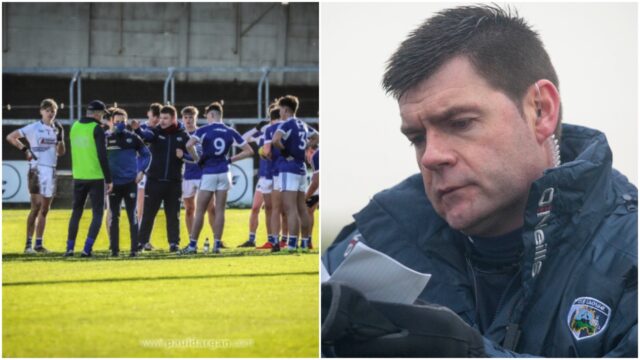 2003 All-Star winning goalkeeper Fergal Byron has been appointed as a selector with the Laois U-20 footballers.

Byron, who also hold the role of Coaching and Games Officer on the County Board, links up with his Courtwood club colleague Eddie Kinsella.

The pair were part of the club’s successful management team that brought them intermediate glory in 2018 and they will hope to repeat that feat with Laois.

It is the second time that Byron has held a selectors role with a Laois team as he was previously in the position with the senior footballers in 2013 under Justin McNulty.

While Ballylinan footballer Pauric McEvoy is the strength and conditioning coach – and he will operate under the guidance of Tom Hargroves who is part of the senior set up.

And Timahoe native Johnny Ramsbottom continues in his role of logistics manager.

Laois have reached the last two Leinster finals in this grade – losing out to Dublin on each occasion but they will be hoping to go one better in 2021.

Meanwhile, the outgoing Laois minor football manager has been retained for a second year.

Mark Bates, who led the team in 2020 to a third consecutive Leinster semi final where they were defeated by Meath, is back in charge once more.

He is once again assisted by former Laois footballer PJ Dempsey and Portlaoise College teacher Paddy Travers while he has added a new third selector.

The Heath’s Joe Walshe is there as goalkeeper coach while Niall Walsh and Mark Delaney continue as strength and conditioning coaches.

While a Fianna Fail Councillor in Waterford, Eddie Mulligan, completes Bates’ backroom team in the role of performance analysis.

But like everything – when the U-20 or minor football championships will be played in 2021 is anyone’s guess.