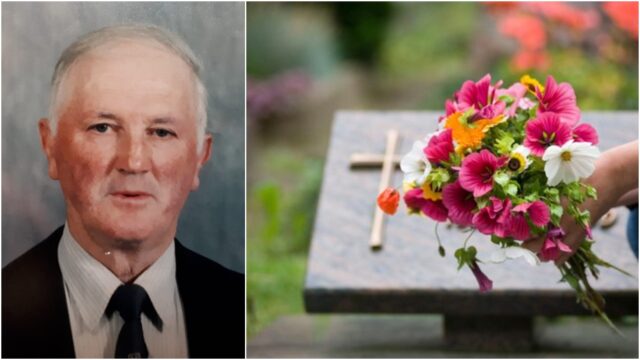 There was sadness in the Vicarstown area this week at the death of Jim Maloney, a highly-regarded member of the local community.

He passed away at the age of 93 after a short illness. Jim is survived by his wife Anne (nee), son James and Eoin, daughter-in-law Veronica and grandchildren Cian, Brian and Evan,  brothers-in-law, sisters-in-law, nephews, nieces, relatives, neighbours and friends.

Predeceased by his brother Frank and sister Maureen (McEvoy).

Jim was remembered by his son James at his funeral mass as “a gentle soul and a gentleman”, though he reflected that the medical staff that dealt with him in recent years always referred to him as “a hardy man”.

In a good-humoured and loving tribute, James said that his father drove the tractor on the family farm – in the Tonefarna townsland where he lived all his life – until he was 89.

But he didn’t give up tractors then, instead turning to playing with the toy models with his grandsons Cian, Brian and Evan.

James described Jim as a man of great faith and of few words who enjoyed the simple pleasure of a few pints in his local pub Crean’s in Vicarstown and missed that socialising in the past year.

He also recalled his time as a greyhound trainer and his experiences with the bookies and the stewards in Shelbourne Park.

Jim’s wife Anne is a pillar of the community in Vicarstown involved in a number of local groups, particularly as a driving force in the Active Retirement group.

The family also have a long association with Annanough GAA club while Jim and Anne were also huge and active supporters of Anne’s brother Tom Mulhall, the former county councillor based nearby in Emo.

Due to the Covid 19 restrictions a private family funeral took place on Thursday in Vicarstown with burial afterwards in Moyanna Cemetery.