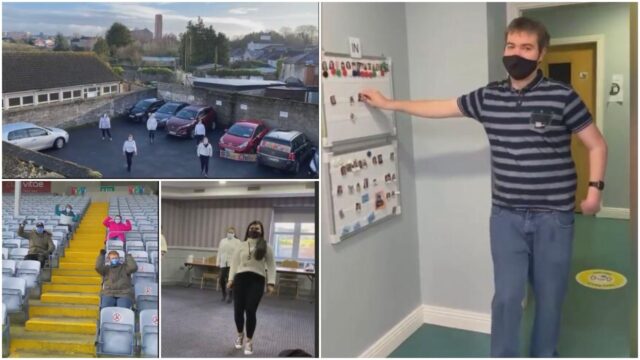 Staff and service users of RehabCare Portlaoise have become the latest to smash the Jerusalema Dance Challenge.

Aideen Phelan, programme facilitator in RehabCare Portlaoise day centre, explained that they decided to complete the dance in order to spread some happiness.

She said: “We, like many others, took on the Jerusalema dance to create joy and encourage being active.

“Our video features staff and people from the services and is filmed across the local community.

“We’d like to thank Chocolate Browns Portlaoise, MW Hire Group, and Laois GAA for their support.”

RehabCare Portlaoise provides a range of support services for people with disabilities, both adults and children, people with mental health difficulties and older people, which support them to
maximise their independence, their community presence and participation.

All across Ireland, RehabCare now offers anyone living with a disability or disadvantage – young and old alike – the personalised, individual support they need to live their lives as fully and independently as possible.

The challenge has really taken off in Laois with a nursing home, hospital, secondary school and retail outlet among those to have completed it.

You can check out the full video by clicking here.