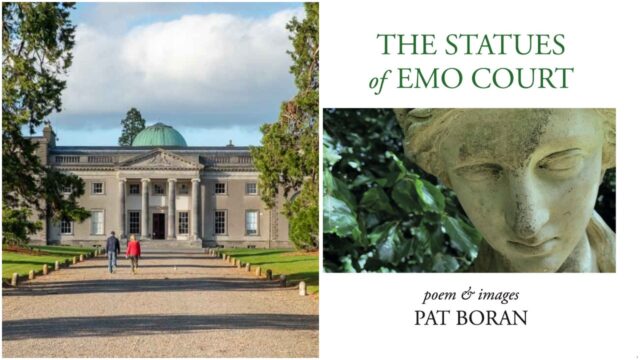 A Laois poet has turned a poem about Emo Court which he dedicated to his late mother into a picture book.

The poem ‘The Statues of Emo Court’ was originally published by Pat Boran, who is originally from Portlaoise but now lives in Dublin, last November.

The poem celebrates patience, resilience and the turning of the seasons.

It is about finding inspiration in the statues of one of Ireland’s most celebrated big houses – Emo Court.

Pat’s mother Nancy passed away a short time after and Pat had dedicated the poem to her before her passing.

Nancy is formerly of Airboran Travel on Main Street in Portlaoise and would be well known to many people in Laois.

Nancy, who was 97 when she passed, attended the Presentation Convent School in Portlaoise as a teenager and worked in the office of Odlum’s Mills in the 1950s.

In 1956, she married Nicholas Boran, a native of Castlecomer. He worked in Whelan’s Hardware shop in Stradbally, and Jessop’s in Portlaoise, before the pair opened Airboran Travel on Main Street in the 1960s.

That business was eventually taken over by Anthony Nolan, but the Boran family remained there before moving to The Downs in the late 1990s.

The Statues of Emo Court is set to be released on March 17 and retails at €10.

It is published by Orange Crate Books and is available to purchase through Argosy Books.

Read the poem in full below while the video appears at the bottom of this story.

THE STATUES OF EMO COURT

Children adore them, adults seem blind,
the wildlife are all devotees:
the squirrels and beetles, the butterflies,
the crows that confer in the trees …

Spiders spinning webs in their limbs,
moss on their shoulders and knees,
as if they were dreaming, the statues of Emo
are out here to practise Tai Chi.

Days and nights are like tides on the move;
the light fades, then inky black
darkness advances, our bleakest thoughts
faces trapped behind glass.

Here, there, alone, together,
wounded they convalesce,
whole worlds reduced to these small circles.
They remind us of ourselves.

Weeks turn to months, and overhead
the bright calligraphy
of cloud on sky is swept aside
until all the mind’s eye can see

is the soft machine of the lake starting up,
and slowly emerging from fog
the tree line, the chimneys, the Big House itself,
and these figures I’ve long come to love:

the jogger facing her long road alone,
the young mother on the school run,
the post man bringing news of the world,
of things done, and so much undone.

This morning there’s sunshine and promise,
but even when frost grips these fields
the battered statues of Emo Court
are out here to practise Tai Chi.

One has an elbow that’s bare to the bone,
others are fresh amputees,
yet nothing, not weather, not worries not woes
prevents them from practising Tai Chi.

Through hardships nigh unimaginable,
through insult and injury
the plaster statues of Emo Court
all the while practise Tai Chi.

I came here first with my mother,
that seems a lifetime ago,
then slowly our roles were exchanged as we strolled.
When I looked she’d already grown old.

But the way she would stroke the cheeks of my boys,
both long since taller than me
in the blink of an eye, was a gesture distinct
as a movement out of Tai Chi.

And back in the days of the Big House itself,
the kitchens all bustle and steam,
the gardens rich with pheasant and fowl,
the lake full of rudd, perch and bream,

imagine the lady’s maid sat up in bed,
the pantry girl roused from her sleep
slipping outside under cover of nightfall
to meet the young men of their dreams;

the treasures of empire heavy on shelves,
the brasses and trophies a-gleam,
while they danced in their night-shifts, or wished that they might,
like the statues that practise Tai Chi.

The Jesuits too in their time came and went,
the leaves shed by time’s tree,
the statues consigned to the depths, so it’s said,
holding their breath for years.

I’ve watched them since I can remember,
their poise, their fragility,
while we pass by in a relative blur
slaves to industry.

Some nights in a small frame of moonlight,
some days under inches of snow,
with nothing much other to do with their time,
and nowhere else to go,

spiders spinning webs in their limbs,
moss on their shoulders and knees,
as if dreaming the statues of Emo,
patiently practise Tai Chi.

And who can say what’s in the future,
where the path up ahead might yet lead.
But the light will return to admire the resolve
of these statues that practise Tai Chi.