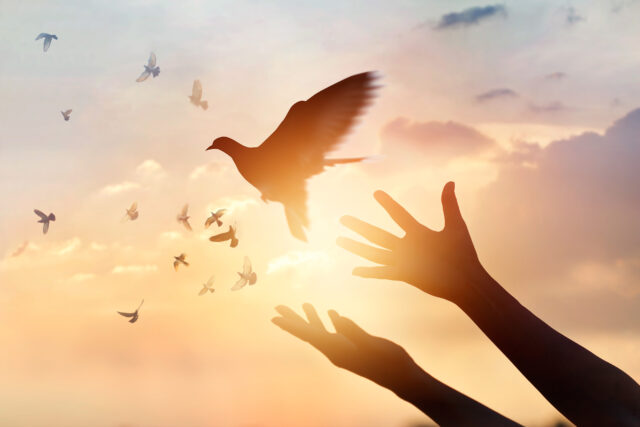 A woman, pushing on in years, boasted to her pastor that she did not have an enemy in the world. He was very impressed.

What a wonderful thing to be able to say after all those years! And then she added:- ‘I have outlived them all’. I suppose if we live long enough we will also be able to make the same statement.

We have all been hurt in some way or other in the journey of life; made fun of in school by a teacher, not invited to the wedding, didn’t get the job I thought I should have got, or at a more serious level, betrayed by someone you trusted, abused physically or emotionally and so on.

Sheila Cassidy, who was herself tortured in South America, had this to say: “I would never say to someone ‘you must forgive’. I would not dare. Who am I to tell a woman whose father abused her or a mother whose daughter has been raped that she must forgive?

“I can only say: ‘However much we have been wronged, however justified our hatred, if we cherish it, it will poison us. We must pray for the power to forgive, for it is in forgiving that we are healed’.”

Nelson Mandela continually reminded his fellow prisoners in South Africa that unless they let go of their hurts they would remain in the grip of their abusers.

By failing to forgive, we hurt ourselves more than anyone else. Surely this is what Jesus had in mind when he told how the merciless servant was cast into prison when he refused to forgive his fellow servant.

I don’t think he was suggesting that God would cancel his mercy. He is simply saying that an unforgiving spirit creates a prison of its own. It builds up walls of bitterness and resentment and there is no escape until we come to forgive.

Forgiving and letting go is not easy, especially when the wound is very deep. This is why I call forgiveness the ‘F’ word, because it’s not to be used lightly.

Forgiveness is a choice and often involves a three stage process: (1) I will never forgive that person (2) I can’t forgive (forgiveness seen as a good thing, but the hurt is too great) (3) I want to forgive and let go with God’s help.

Also we must learn to forgive ourselves. Imagine you are responsible for something very serious. You are driving a car with drink.

There is an accident and a young person is killed. That life cannot be brought back. For more and more people there is a something in the background, some skeleton in the closet – a broken marriage, a broken relationship, a serious mistake.

And for many of us we do not believe that there is another chance much less a seven times seventy chances. This is not the teaching of Jesus. God does not just give us another chance, but every time we close a door he opens another one for us.

The Lord challenges us not to make serious damaging mistakes, but he also tells us that our mistakes are not forever–they are not even for a life time, and that time and grace wash clean, that nothing is irrevocable. Nothing can separate us from the love of God.

Pope Francis has said “gossiping is a worse plague” than the coronavirus, claiming it can be used to divide the Roman Catholic Church.

Speaking during his weekly address from a window above St Peter’s Square, Francis urged people to “never gossip”. Francis continued: “The devil is the great gossip. He is always saying bad things about others because he is the liar who tries to split the Church.”

In the unscripted comments, the 83-year-old added; “If something goes wrong, offer silence and prayer for the brother or sister who make a mistake, but never gossip.”

It is the not the first time Francis has brought up the subject of gossiping. In 2016, he urged priests and nuns to avoid spreading stories within their community to prevent the “terrorism of gossip”.

The heart of the Gospel is one of healing and forgiveness. May we all go in the grace to be able to let go, so we can begin again.