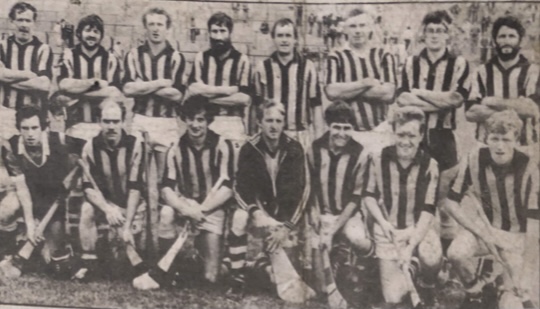 There’s something about a five-in-a-row in the GAA world that has proven so difficult for so many teams to achieve.

And so it proved with the Portlaoise hurlers in 1985 when their fine team of that era were denied an historic success by their great rivals Camross.

Four years earlier Portlaoise had stopped Camross from winning a record-breaking six-in-a-row and The Town had gone on to dominate the following years – famously winning four titles in succession in four different venues at a time when O’Moore Park was being redeveloped.

In 1985, it was Camross’s turn to return to the top table as they claimed their 16th senior title.

“We’ve won a lot of championships but none as sweet as this,” said chairman Pat Delaney after the game. “We’re back on top where we belong.”

The sides had played twice earlier in the year, drawing in the group stages before Camross won a play-off to decide who took top spot.

But they both had comfortable wins over Kilcotton, Ballacolla and Abbeyleix before Portlaoise got the better of Rathdowney and Clonad to book their final place. Camross beat Ballinakill in the semi-final.

“The dogged resilience that has kept Camross at the top of Laois hurling for well over 25 yeas was certainly crystal clear at O’Moore Park on Sunday last,” was the opening paragraph of Eddie Cassidy’s match report in the Leinster Express.

“Tenacious defensive work, in particular, helped Camross keep in touch with the defending champions throughout and after trailing until the final stages, they delivered the killer blow with a hard-worked scrambled goal by Vinny Palmer four minutes from time that finally ended The Town’s hopes of equalling the elusive five-in-a-row championship titles.”

Cassidy noted in his report that Portlaoise had two late chances to force an equaliser on what he described as a cold and wet November Sunday afternoon in front of 3,000 supporters in O’Moore Park.

Portlaoise were without the suspended John Taylor (after being sent off playing a league game for Laois the previous Sunday while Pat Critchley was only introduced as a second-half sub. But they led 0-5 to 0-3 at half time and with seven minutes remaining were 0-7 to 0-4 ahead.

“But despite the stout defensive play of Portlaoise, it was inevitable that Camross were going to pierce their lines,” wrote Cassidy.

“After Frank Keenan reduced the deficit to two points with a close-range free Camross edged into the lead for the first time with four minutes remaining when Keenan’s shot into the crowded defence broke free to Vinny Palmer who finished the shot to the net.

“It was a typical hard-worked Camross goal and it proved to be the winner as twice in the last two minutes Portlaoise missed chances of forcing the equaliser.”

After the game, amid scenes of great celebration, PJ Cuddy was presented with the O’Keeffe Cup by Laois GAA chairman Sean Ramsbottom. Cuddy became the third member of his family – following on from his brothers Sean and Ger – to captain the club to county final success.

And the Leinster Express county final snippets also reported on the incredible dedication and committment of Camross forward Mick Cuddy who played the game with a “lightweight fibre glass pad under his black and amber shirt” to protect his fractured collarbone that he injured in training the previous month.

To add to that great tale, Cuddy flew in from New York for the final as he had emigrated at the time. He had previously returned for the semi-final. It was his seventh county final success in total.

Also on that same day Portlaoise beat Camross in the minor final as Camross, bizarrely, would have to wait until 2005 for a first minor success.

Camross would return to successfully defend the title again in 1986 while Portlaoise came back to win it again in 1987.

SEE ALSO – PJ Cuddy on Camross, the 1980s with Laois and his views on the game today