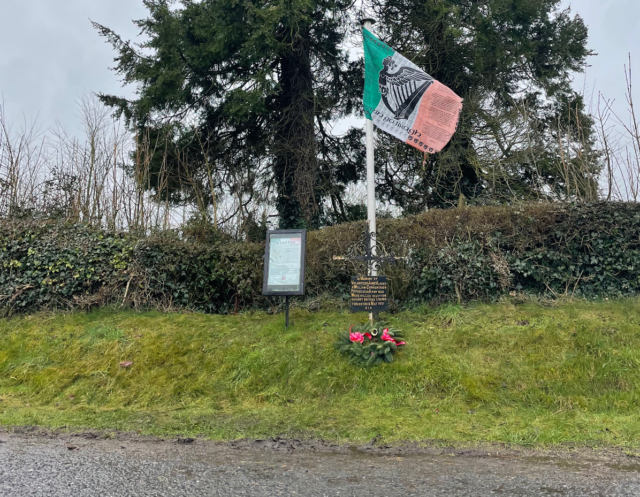 As we make our way to the end of the Decade of Centenaries, we are reminded of events in our history that are widely known and also, we are left to explore events that many know little about.

This year marks the Centenary of The Barrowhouse Ambush of 1921.

Barrowhouse, a small community which has a remarkable history for such a small part of County Laois, has deep roots in the Irish War of independence.

The War of Independence was a turbulent era in Irish history but nontheless it paved the way for the establishment of the Irish Free State.

In the last 20 years the topic of the ambush has been touched on by many and it is now as we near the end of the Decade of Centenaries that we can begin to unravel our history with a contemporary view.

Many local men from Barrowhouse and its surrounding townlands were part of the B Company, 5th Battalion of the Carlow Brigade. Among their members were William Connor and James Lacey.

Even though the division of these Battalions altered after the Truce in 1921, this company still remained part of the Carlow Brigade.

Even with Barrowhouse being a townland of Laois, the boundaries of the brigades did not work with county borders, and many brigades took in areas of several different counties.

The Commanding Officers of the Carlow brigade at the time had no easy feat, the area to be covered ranged from Barrowhouse in County Laois to Hacketstown in County Carlow.

It was on the 16th of May 1921 that members of the B Company had an ambush planned to attack a local convoy of RIC.

The RIC frequently passed through Barrowhouse, let that be on their way from Athy RIC barracks or from Ballylinan RIC Barracks. At the time there was several RIC Barracks in the surrounding areas.

The ambush party consisted of only some of the local men of the B company. As the volunteers waited, they realised their location would jeopardize the safety of the children at the local school and considering the size of the area, the children in the school could have been siblings or nieces and nephews of these men. With that the ambush party had to relocate at the last minute.

Shortly after 4pm, the first sounds of gunfire of the ambush took place and could be heard throughout the area.

“Locals reported that the gunfire lasted for at least ten minutes before silence rang out through Barrowhouse, with the questions raised, what happened and to who,” writes Nessa O’Meara who is writing a book The Barrowhouse Ambush 1921 on the topic.

It was within those shots that William Connor and James Lacey took their fatal blows and died instantly at the ambush site on the Barrowhouse to Ballylinan road more commonly called Shanganamore.

The story of the Barrowhouse Ambush explains a narrative that was quite common throughout the time and is explored in-depth by the upcoming book.

Not all ambushes resulted in the intended outcome but nontheless it was men and women throughout our country that gave us the freedoms we have today such as open dialogue like this.

If commemorating the young men such as James Lacey and William Connor and telling their story is something we can do as a show of gratitude for their ultimate sacrifice, then it is something we must endeavour to do.

That endeavour has been taken on board by the community of Barrowhouse. Through the Community Association of Barrowhouse, a sub-committee has been established.

The committee was established to take stock of the current site of the Barrowhouse ambush and purpose ideas for its redevelopment. The committee has submitted plans to Laois County Council to redevelop the site of the ambush to include the simple cross that has remained the primary source of information at the ambush site since 1921.

In addition, the committee hopes to be able to plan a commemorative event when covid restrictions are lifted. The committee comprises of local members of the community and is inclusive of family members of James Lacey and William Connor. The community will keep the public up to date on this by using their social media pages and local papers.

In addition to the above, the great grand niece of William Connor, Nessa O’Meara has been writing a book on the Barrowhouse Ambush and will launch the book when the community is able to hold a commemorative event.

It is with that in mind that the committee ask that if anybody has photos of William Connor and James Lacey or information related to the topic to please get in touch via their Facebook page which is @thebarrowhouseambush or via email which is thebarrowhouseambush@gamil.com.