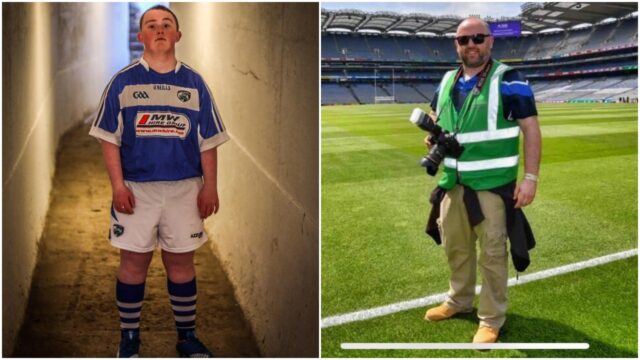 A well-known Laois man’s photograph of a huge Laois GAA fan has won a national award.

Graiguecullen’s Paul Dargan and his photo of the legendary Jack Bolton was honoured at the TRUST Ireland Awards Ceremony on Thursday night.

TRUST is a partnership project led by Munster Technological University on human rights and sport funded by the Council of Europe and the European Union with Ireland’s funding from the Irish Human Rights and Equality Commission.

Entrants submitted photos or videos on what “human rights in and through sport” means to them, along with a short caption explaining their choice.

Paul’s photo captures fellow Graiguecullen man Jack in the tunnel just before he was about to enter the field in Netwatch Cullen Park in 2018.

Jack was named vice-captain of the Laois footballers that day as they faced Carlow in Division 4 of the National Football League.

Laois needed a win to secure promotion and the then John Sugrue managed footballers were inspired by Jack’s presence as they won 1-6 to 0-8.

It was a result which sparked a remarkable run that saw Laois claim the Division 4 title before making it all the way to the Leinster final where they were defeated by Dublin.

Dargan, who is the PRO of Laois GAA, took to Twitter last night and paid tribute to Jack.

He said: “Thank you all for your kind words/calls/texts on winning this award, great surprise and really appreciated.

“Some amazing photos from talented people all over the world.