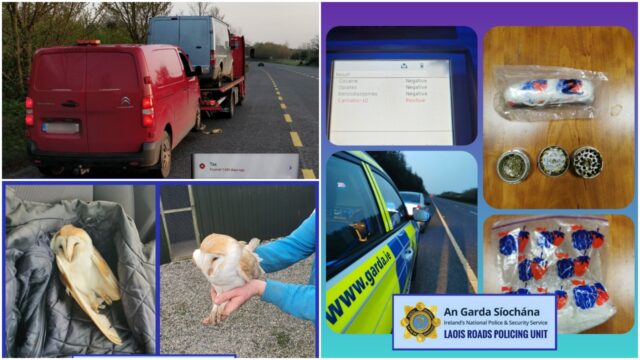 Gardai made an arrest and seized €6,000 worth of drugs following a speeding incident yesterday evening.

They stopped a female driver on the M7 and she was captured traveling at 148km/h.

Gardai recovered a quantity of drugs in the car and made another seizure at a house in Tipperary.

“A female driver failed the road side drug test and was arrested.

“The car was searched and a small quantity of cannabis herb was recovered along with €4,500 euro of suspected cocaine.

“A follow up search was carried out at an address in Tipperary which resulted in the seizure of another €1500 worth of drugs.

“We will continue to disrupt and deny criminals the use of our road networks.”

On Wednesday morning, Gardai completely a rescue mission to save an injured owl on the M7.

“The bird was found in a very weak condition and was taken for immediate medical treatment.

“The Laois Barn Owl Project was contacted to provide care and assistance and hopefully this beautiful owl will make a full recovery.”

The vans, one of which had not been taxed in four years, were stopped near Portlaoise.

Gardai say: “Two vans were seized by Laois Roads Policing Unit at a covid checkpoint outside Portlaoise on Tuesday evening.

“The first hadn’t been taxed in 4 years and the second was discovered to be displaying an insurance disc for another vehicle.”