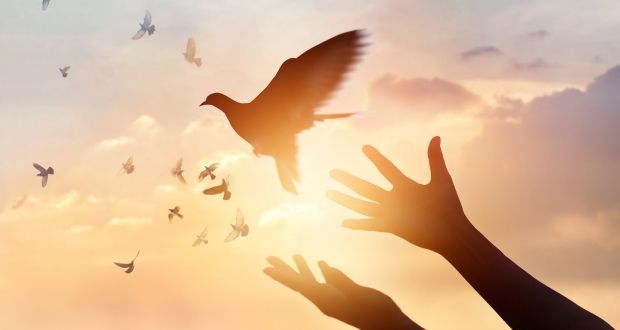 “He is not here, he is risen”, is the signal message which the women receive as they make their way to anoint the dead body of Jesus. That the Lord is truly risen is a fundamental element of the Christian faith.

The Old Testament readings at the Easter Vigil liturgical celebration are all about how God created every dimension of the cosmos as good and that when humankind drifted away from God’s original plan, God remained faithful.

Throughout the centuries God guided those with faith away from the path of oppression and persecution and domination towards that new liberty which would then be fully achieved in Jesus death and Resurrection.

Jesus came to save us, to liberate us for new life. Christianity is a faith of new life and of liberation. Saint Paul, tells us, “In baptism we are joined with Christ’s death, so that as Christ was raised from the dead by the Father’s glory, we too might live a new life”.

Certain theologies spoke about freeing people from sin, but had developed a concept of sin and sinner which made it almost impossible for a sinner ever to feel himself or herself truly liberated.

There were so many rules that many were left with a sense of scrupulosity which left them trapped and oppressed by guilt and doubts.

We had created a religion of fear, so much that even when we tried to live the good life we were never left with a sensation of being free.

Certainly Christianity is not a religion of anything can go. The good life is a life lived in goodness rather than in libertinism.

We had overlooked that sin in its essence is not a failure to observe rules and norms: is it a failure to love. We could find people who observed all the norms and yet were the deepest of sinners because of the way they lived.

We could find poor sinners who failed and failed again but their struggle was a struggle to be loving persons and they realised that the Lord’s hand was always there to pick them up again, so that they could stand up once more and with their head hung high.

Jesus had a special love for sinners. He reached out to sinners: he spoke to prostitutes and adulterers; he touched lepers and the unclean; he released people from the bonds of possession which weighed them down. Jesus has come to liberate.

The Lord is truly risen. It is not an easy thing to believe. It defies rationality. We note in the various Gospel accounts how the disciples who head out to visit the tomb, head out to anoint a dead body and that when told they find it hard to understand that Jesus is truly risen.

But if Jesus has risen from the dead his message to us is that with faith in him even what seems impossible in our lives can be attained. Rather than a faith that imprisons us in our weakness, Christianity is a faith which opens horizons of possibility. The mercy of God is a sign that the Lord wants us to rise with him to great things.

Saint Paul wrote: “As Christ was raised from the dead by the Father’s glory we too might live a new life”. We are not called to reflect or discuss the new life. We are called to live the new life.

The Christian cannot live at peace in word where people are oppressed. If Christianity is a faith of liberation, then the Christian and the Church of Jesus Christ must be a place of real witness to the reality of the powers of darkness which still today trap people in oppression.

None of us can claim to be free if we live immune to the fact of so much oppression and need for liberation. Freedom is not the privilege of the few: it is a call to take responsibility for all.
Too often however we acquiesce in watching oppression.

Too often the Church has fallen into the logic not of new life but of siding with power and conformity and safety. A Christian theology is always a theology of liberation.

Liberation is present in the Church through the presence of the Risen Lord who enables us – and challenges us – to live the dangerous and perplexing path of freedom.

The Lord is truly risen. Our belief is in the resurrection of the body. The risen body of Christ is the light and the hope for our bodies.

How then can we be insensitive to the needs and the suffering of the bodies of children who are victims of violence and abuse; how can we not be angry with those who support an industry which fosters a drug trade which holds people trapped in addiction; how can we hide away from the fact of the sexual exploitation especially of women; how can we be insensitive to hunger and yet spend millions of a false culture of the body; how can we be unconcerned by political and economic cultures which leave men, women and children unable to realise their full abilities.

Jesus is raised to new life. As Christians we are called to live newness of life, a life which is founded on integrity and truth, on honesty and love. The Christian life is a calling for all Christians.

There is legitimate separation between Church and State; but the Christian cannot avoid working to ensure that the new life of Christ reaches out into every corner of a society.

We celebrate the mystery of Christ who died and Christ who is risen to bring us new life. We thank God for the gift of the new life of the Risen Lord. We open our hearts to the Risen Lord so that we can become heralds of new life to all who lives are troubled, beleaguered and oppressed in mind or body. Easter is a powerful gift of Hope!!!

This Easter Season, may we be anointed with great hope and peace. O God and Heavenly Father, Grant to us the serenity of mind to accept that which cannot be changed; courage to change that which can be changed, and wisdom to know the one from the other, through Jesus Christ our Lord, Amen.