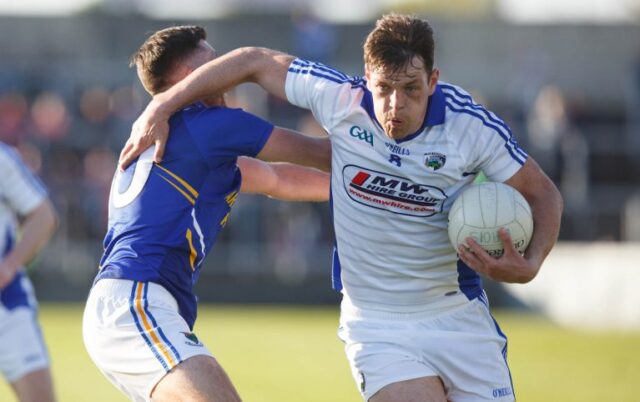 Given that John O’Loughlin has played for Laois for so long and has been an ever present on the county senior football team since making his debut as a 19-year-old in 2008, it’s not surprising that he has a huge amount of memories in the blue and white jersey.

Though he was too young for the Mick O’Dwyer era, he has had both good and bad days with the county and now sits behind only Ross Munnelly and Padraig Clancy with the most appearances for Laois.

Speaking recently on the LaoisToday Talking Sport podcast, he described how he took a defeat to Wexford early on his career badly while the 2012 season that saw Laois reach the All Ireland quarter-final remains a highlight.

O’Loughlin had played in an All Ireland U-21 final in 2007 and that same year was a key player for the minors in their run to the All Ireland semi-final.

So to be badly beaten by Wexford in the 2008 Leinster semi-final was a considerable disappointment.

“Before that match I loved playing matches and loved playing for Laois – and I still do – but … because we were quite poor on the day, I took that very personally even though I was 19.

“It had a big effect on me. That was one of the biggest disappointments.

“I probably didn’t handle it as well as I should have because I was so young and I let it get to me so much.

“I’ve had a few bad beatings from Kildare. I remember every defeat and it’s hard to narrow it down … but that is a match that sticks out.”

And when asked what was a standout memory, he picked out a Round 2 All Ireland qualifier in 2012 that set Laois off on a great run.

“I’d look at Monaghan in 2012. I think that was my fifth season and before that match I’d never won two championship matches in a row with Laois,” he said.

“We beat Carlow in first round of Qualifiers and then played Monaghan in Portlaoise and it was a Monaghan team stacked with future Ulster winners – Conor McManus, Tommy Freeman, Darren Hughes, Eoin Lennon, Dick Clerkin. A really good team.

“It was a great win. A huge win. First time I had two wins in a row at senior level in Laois jersey.

“It’s a game I always look back on fondly.”

Laois later beat Leitrim and Meath before running champions Dublin to three points in the All Ireland quarter-final.