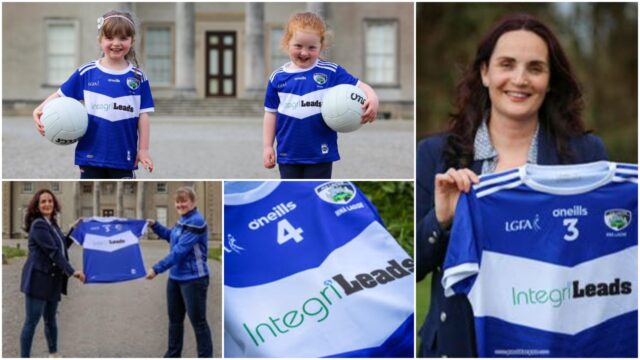 The Laois ladies footballers have unveiled new jersey sponsors for the upcoming 2021 season.

IntegriLeads, which specialises in setting up crucial sales appointments for technology companies, will sponsor the team this year.

Only set up in early 2019, they have successfully grown their client base since which is no mean feat considering that they were disrupted considerably by Covid just over a year after they opened their doors.

They have clients across Europe, the US, Canada and Australia.

Set up by Aisling Kirwan (sales director), Jayne Delaney (operations director) and Eimear O’Connor (delivery director), they were initially located out of Portlaoise but have since moved their base to Bloom HQ in Mountrath.

Speaking about their decision to back Laois LGFA, Eimear O’Connor said they were excited to be part of a sport that is heading in the right direction.

She said “We are excited about the future of LGFA and more specifically Laois LGFA.

“We are very honoured to see the company that we work very hard in developing associated with an organisation with similar determination.

“Like many other women across the county we have all had positive experiences playing and supporting ladies football at various levels throughout our lives.

“Jayne Delaney, our Operations Director, is a Newman from Ballyadams and is a St Joseph’s woman. By her own admittance football wouldn’t have been her strength but it was a huge part of her childhood and teen years.

“Jayne’s sister Lisa, who also works for IntegriLeads, played midfield for the Laois ladies underage teams and her dad Joe was a selector in the late 90s.

“Aisling Kirwan, our Sales Director is a Ging originally from Portlaoise and now settled in Mountrath, played her football with Park-Ratheniska and represented Laois on a number of occasions.

“She is a member of the local Mountrath ladies football club and was heavily involved with G4MO’s and other initiative a few years back.

“I’m a Ward originally from Portarlington now living in Trumera. My time playing was with Portarlington Ladies back in the 90s which gave me a huge love for the sport.

“I am the former chairperson of my local club Mountrath, now treasurer and am a member of the National Hearings committee also, so I like to stay involved where possible.

“Gaelic football is the backbone of Ireland and the LGFA are hugely important for young girls coming through the ranks who want to play at a high level.

“Their efforts in providing an inclusive and empowering environment for ladies in the sport is something that really resonated with us.

“We are excited about the future of LGFA and more specifically Laois LGFA and are very honoured to see the company that we work very hard in developing associated with an organisation with similar determination.

“We are very proud of the ladies representing our county.

Laois LGFA Vice-Chair Phil O’Keeffe said: “When we were informed that Integrileads were coming on board as our sponsorship for Laois LGFA it was a great honour for Laois Ladies.

“Not only for the sponsorship, but also to have such a great company onboard and in partnership with three woman who have strong professionalism in there work and we hope that there contribution will bring a strong relationship with Laois LGFA.”

Recently, the ladies footballers also received confirmation of their fixtures for the upcoming National League Division 3B campaign.

Donie Brennan’s charges will be at home to Kildare in Round 1 on Sunday May 23 with away games against Longford (May 30) and Wicklow (June 6) to follow.

Should the finish in the top two in the group, they will advance to the semi finals which are pencilled in for June 12/13.

There will then be a two week break to the finals which are scheduled for June 26/27.