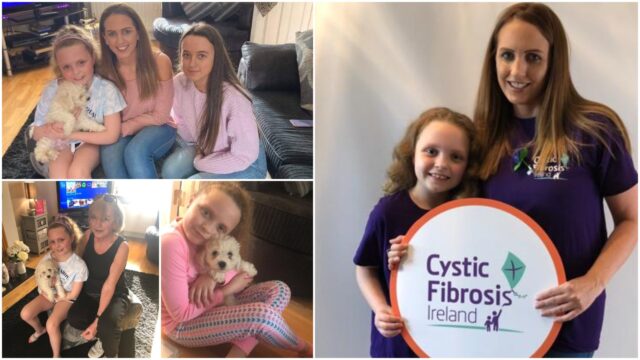 This Laois mammy is in the running for a prestigious annual award – having already scooped the April edition.

Portlaoise native Louise Lynam was recently named ‘Mum of the Month’ for April in the Women’s Way and BEKO Mum of the Year awards for 2021.

Louise, a healthcare assistant in the Accident and Emergency Department at Portlaoise Hospital, is a single mother to two wonderful daughters – Jessica (15) and Kiera (9).

Ms Lynam was nominated for the award by Cystic Fibrosis Ireland – a charity both she and youngest daughter Kiera are ambassadors for and have fundraised for over the years.

When Kiera was just a few weeks old, she was rushed to Crumlin Hospital with a bowel blockage.

It was there that doctors discovered that Kiera had cystic fibrosis.

This is a hereditary disease that affects the lungs and digestive system. The body produces thick and sticky mucus that can clog the lungs and obstruct the pancreas.

The lives of the Lynams changed that day as mam Louise quickly came to terms with the medication, therapy and regular check ups that Kiera required.

Things were further complicated when Kiera turned five as she developed pseudomonas – a chronic lung infection which left Kiera with little energy and requiring strong antibiotics that needed to be administered twice daily through a nebuliser.

But thankfully, in 2018, a new drug called Orkambi was approved and Kiera was eligible to take it.

Mam Louise explained: “We were so lucky that she met the requirements to become eligible for the drug.

“It completely transformed her life. She went from having very little energy to being extremely active.

“She loves her dancing and gymnastics classes – things we never thought she would be capable of doing.

“The big difference now is that if she does get a cough, the mucus comes up straight away rather than her having to fight it for weeks and leaving her very tired.

“Previously, Kiera was on antibiotics the whole time and I think she has been on about three in the three years since – she is a completely different child.

“Kiera still has to spend time on her nebuliser, chest physio and take 22 tablets a day but she is a very happy child and we are so lucky to have her.

“Her older sister Jessica is brilliant too. She looks out for her so well and is an excellent support to me.

“I am so lucky to have them both – as well as my mam Connie.”

Like everyone, the lives of the Lynams changed dramatically when the Covid-19 pandemic struck.

Mam Louise took Kiera home from Holy Family Junior School before schools were ordered to close and she was very fearful that she would contract Covid in work and bring it home.

However, as a single mother she says she had to continue working but she paid tribute to her hospital colleagues for helping to keep her safe.

Louise said: “When Covid struck first I was terrified – I was wondering if I should stay working or take leave. But being a single mother, I just couldn’t live on €350 per week.

“When the pandemic struck, mammy minded the girls for me while I was at work and they were home from school.

“And at that, when I was coming home, mam would go out to her car and wait for me to arrive so she never actually interacted with me either. It was a stressful time but we got through it.

“All I could do was be extra careful but the team that I work with in Portlaoise are brilliant.

“If we have a positive case, they would say to me to stay outside and ‘buddy’ them – they are always thinking of Kiera and keeping her safe too.

“We are very much on the frontline and we meet people as they come in – not knowing whether they are positive or not.

“It was a very worrying time for a parent of someone in a high risk category and it was tough on Jessica too. She only returned to school this week and she’s barely seen anyone in that time as she is mindful to be careful with Kiera.

“But with work, once I got to know more about the virus I got more into a routine. When I come home from work, I change my clothes, shower and boil wash my clothes.”

Kiera returned to school when they reopened in September and mam Louise paid tribute to Holy Family Junior School principal Enda Hickey and all of the staff for how they look out for Kiera.

She said: “Mr Hickey kept me regularly informed of what was going on and he was constantly in contact with me.

“The minute they heard of a child having a cough or cold, Kiera would be moved to the other side of the room.

“Kiera’s SNA Mary is amazing. She comes in every day with a new tablecloth and constantly has everything sanitized. They are so protective of her and we are so appreciative of all they do.”

Kiera is flying it now – she got a new puppy called Alfie who is her pride and joy.

She is only scheduled to visit Tallaght Hospital once a year now – a big difference from the regular visits in the early part of her life.

Covid-19 restrictions pending, Louise and the other ‘Mum of the Month’ winners will come together later this year for an awards ceremony where the overall winner will be chosen by representatives from Women’s Way and BEKO.

And we certainly believe that Louise would be a very worthy winner!