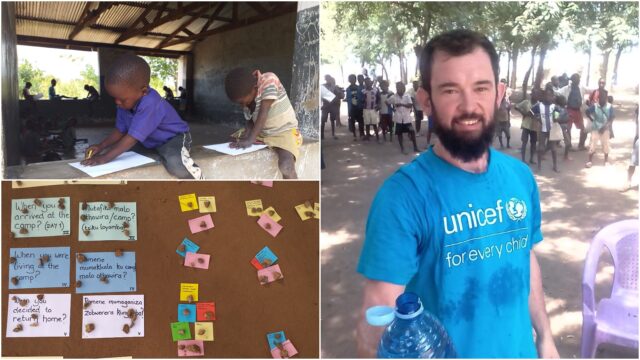 Glenbarrow native Evin Joyce has been an aid worker professionally for almost ten years. Currently in Malawi, he has divised an ingenious path to education for local children.

Evin explained his project ‘School in an Envelope’ on the LaoisToday Midweek Podcast, with Paul Downey.

Evin was working in Malawi for UNICEF after Cyclone Idai in 2019 and in that time visited more than 40 nurseries, many on islands and all in remote areas.

Evin said these nurseries all had very consistent needs.

He explained: “They had no teaching materials. As a an assistant teacher, before I got into the aid work myself, I know there is nothing as bad as just standing in front of the class of kids not knowing to what to do or what to say.

“They had no porridge to give to the kids, because the kids would often come hungry. They had no building. They would just be doing the nursery and a tree and they had no pens.”

Evin looked at the ways he could improve the teaching materials. On advice from his sister Ailbhe, a primary school teacher then working in Abu Dhabi, they came up with School in an Envelope.

School in an Envelope is an inexpensive teaching pack of laminated flash cards, that can be adapted depending on age.

Beginning this project, they experimented with homemade cards and used them playing games with the kids in the nurseries. Evin explained “once you have pictures and cards and really simple rules, you can do different activities.”

They had to refine the prototype of the flashcards as Evin says “that stereotypical thing of the red Earth, the red dusty ground of Africa under an Acacia tree –  that fits the stereotype exactly here, but that red dirt destroys paper flashcards instantly.

“So one of the refinements was okay, we’ve got to laminate them.”

They have continued to expand School in an Envelope.

Evan said: “We’re at a point now where, Ailbhe, my sister, has come from Abu Dhabi, she flew over to Malawi in December, just before the global second wave, and now she’s taken over the School in an Envelope project as a professional teacher.

“We’ve got a baseline literacy test and a numeracy test that she’s doing with the kids in nurseries all around where we’re based right now.

“We’re just going to see if we can move the needle on these kids, most of them between three years and five years of age, click and move the needle in improving their numeracy and literacy.”

Evin concluded that School in an Envelope is a really cheap and easy to use set of educational resources, adapted to the African environments.

“They can be torn and stood on. It’s bitten by a five year old but will still survive and can be easy for the for the teachers.”

You can learn more about this project on Evin’s website – Ulemu.com.