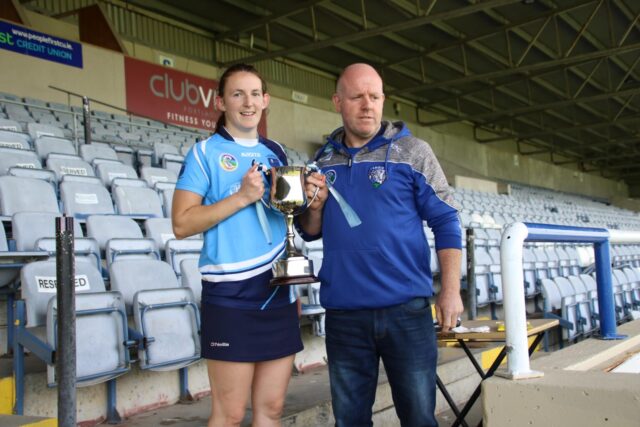 Laois Camogie co-captain Alison McEvoy has heralded the young talent within the panel ahead of the start of the 2021 season.

Last season, Laois reached the All-Ireland intermediate semi final where they lost out to Antrim.

It was a year where manager John Desmond brought through a number of players who have won minor and U-16 All-Ireland titles in recent years.

The likes of Molly O’Connor, Clodagh Tynan, Aimee Collier, Jessie Quinlan, Kirsten Keenan and Liaden C-Fennell all broke into the squad and made really positive impacts.

Speaking ahead of the resumption of matches this weekend, McEvoy, who shares captain duties with Roisin Kilmartin, explained how important those younger players have been.

She said: “Last year was a good year for us and it showed the potential that we have in the squad.

“We are building on that this year and it is driving us on even more.

“Some of the girls are ten years younger than I am – there is a huge gap between us.

“But they are so good and have so much potential, and it is really good that they are playing at this level in this stage of their career.

“They need intense sporting games. They came from great minor teams and they were great groups all the way up along – it was exactly what Laois Camogie needed.

“It allowed us to start from scratch again and get things going.”

Laois will compete in Division 2 of the National League this year and that has been split into four groups – comprising of two groups of three and two groups of four.

The top two in each group will progress to Quarter-Finals and Laois are in Group 3 alongside Wexford and the second team of Kilkenny.

They begin away to Kilkenny on Saturday afternoon, who were beaten by Wexford last weekend, and McEvoy is anticipating a very tough game.

She said: “They will be a decent side but we will give them the best game that we can give them.

“We’ll have Wexford then after that so we’ll figure out where we are after those games.

“Wexford beat Kilkenny convincingly last weekend and they’ll be determined to get back up to senior.

“It’ll be a tough group for us but we will do our very best and that is all we can do.”

You can check out the full interview with Alison McEvoy on the Talking Sport Podcast on Thursday.