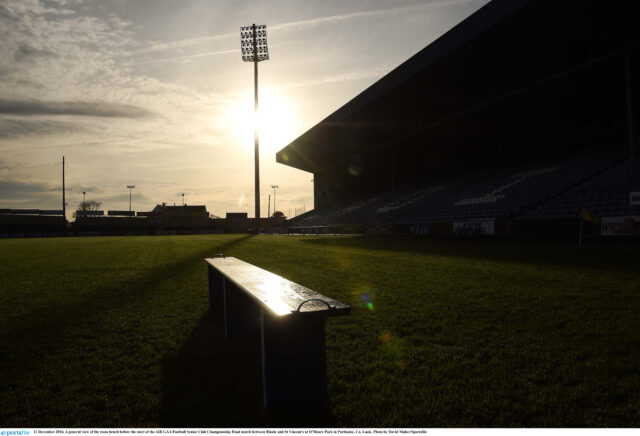 A clinical performance from Camross saw them claim the 2020 Laois JHC ‘B’ title over Portlaoise on Sunday afternoon.

After racing into an eight point lead after just ten minutes played, the final outcome of this was never in much doubt, as Portlaoise just couldn’t live with a lively Camross side.

Cillian Tiernan, Niall Bennett and Dan Delaney lead the charge for the winners, who were full value for the victory.

Camross dominated from the early stages, helped in the opening minutes by the strong breeze at their backs. Cillian Tiernan opened the scoring with a nice point in the second minute, and Niall Bennett added another soon after.

Portlaoise were struggling to create chances at the other end but it was a lot more effortless for Camross at the other end. Robert Delaney got their third score, meaning all three members of their full-forward line had scored from play inside of five minutes.

Dan Delaney (free) and Bennett pushed them five ahead before their first goal arrived. A poor clearance in the Portlaoise defence gifted Cillian Tiernan possession 25 yards out, and he raced forward before burying the ball in the bottom corner.

Dan Delaney added another free before Camross got their second goal, this one from the stick of Niall Bennett after a strong run through the middle.

Tom Mulligan finally opened the Portlaoise account from a free in the 15th minute, and they added another after the water break thanks to a 65 from Brian Mulligan.

Matthew Dempsey made it two in a row for them with a fine score from the right wing, before Gavin Skehan saw a couple of goal chances trickle past the post.

Camross kept powering on, Sean Higgins hitting a brace before Robert Delaney got his second of the game, with the final outcome looking in little doubt well before half-time.

To Portlaoise’s credit they kept plugging away, Tommy Mulligan getting their fourth point of the game from a free before Gavin Skehan made it third time lucky for him with a brilliant goal from 20 yards out.

Cillian Tiernan and Niall Bennett then hit a point apiece for Camross before half-time to leave the men in black and amber 2-13 to 1-4 up at the changeover.

If Portlaoise were hoping the wind would help swing things back in their favour they would be left disappointed, as Camross continued to hold the upper hand, although the half was more evenly contested.

Dan Delaney hit a couple of frees for Camross but Portlaoise hit back through Aidan Nealon and Tommy Mulligan. They kept swapping points until Camross broke that run with their third goal, a brilliant individual effort from Cillian Tiernan just before the second water break, leaving it 3-17 to 1-8 heading into the final quarter.

It was training ground stuff for what time remained as both teams ran in a number of subs, with Camross running out deserving winners at the final whistle.