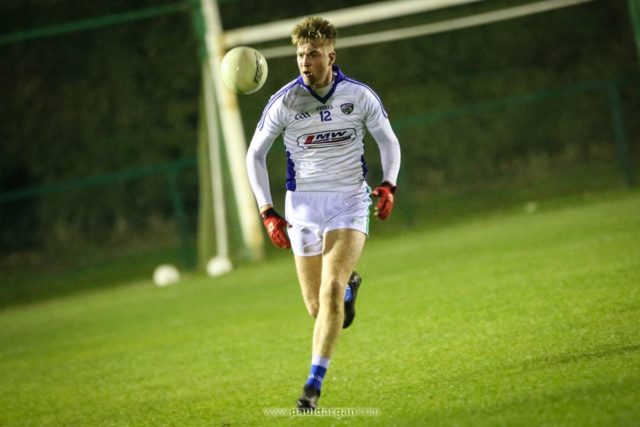 Courtwood endured a miserable 2020 but the early signs for 2021 are good as they scored a five point win over O’Dempsey’s in the Old Pound this evening.

The winners did some good off season business with former manager Eddie Kinsella returning and Rob Tyrrell transferring in – and he gave an exhibition in the middle of the field tonight.

The Camross native kicked a fine point and won kick-out after kick-out. Wing back Sean O’Flynn was equally as impressive too – running directly at O’Dempsey’s with great pace every time that he won possession.

When the sides met in the championship last year, O’Dempsey’s scored seven goals in a very one-sided game. But with the addition of Tyrrell and youngster Adam O’Halloran plus the return of Barry Donnelly from overseas and Niall Dunne from injury, Courtwood look far stronger.

Nevertheless, it was O’Dempsey’s that actually had the better of the early exchanges as a Barry Howlin goal gave them a lead early on.

Matthew Finlay and Luke Doyle then traded efforts before a great Niall Dunne score cut the gap to two at the water break – 1-4 to 0-5.

Courtwood continued to improve and Alan Kinsella reeled off three points in five minutes either side of an Eoin Finlay point to level the game.

Rob Tyrrell put Courtwood ahead but Sam Molloy sent us in level at half time – 1-6 to 0-9.

Courtwood took a lead they would never relinquish one minute into the second half.

Niall Donoher caused havoc down the wing and when he cut in towards goal, he was fouled by Shane Nerney and referee Brendan McCann awarded a penalty.

Niall Dunne stepped up and tucked a shot into the bottom corner of the net to put three between them.

Matthew Finlay responded but O’Dempsey’s were guilty of kicking several wides after that which stifled their momentum.

And clear daylight was put between the teams after 40 minutes when the excellent Tyrrell intercepted an O’Dempsey’s attack and set up a counter attack.

Danny Luttrell added a free and Courtwood led 2-10 to 1-7 at the second water break.

Luttrell made the gap seven on the restart and O’Dempsey’s went in search of goals after that.

But all they managed were two Matthew Finlay frees as Courtwood held on for a deserved win.