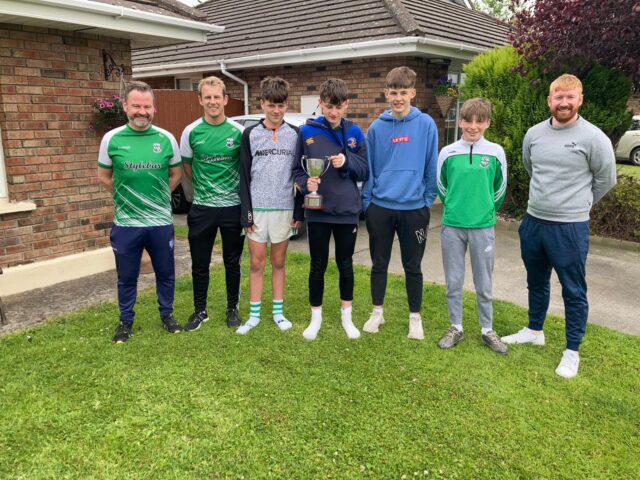 Portlaoise GAA club are no strangers to winning county football titles and they were again on the winning podium on Monday evening when they won the delayed 2020 U-13 ‘A’ football final by getting the better of Portarlington in the Centre of Excellence.

For one of their main players, however, it was an evening of mixed emotions.

Ben O’Connor badly injured his arm in an unfortunate fall, needing a trip to hospital where it was confirmed he had a broken wrist.

It meant he missed a good chunk of the game, the celebrations and the presentation though he didn’t need to go far to get an update on how things had played out. The sub that replaced him was his younger brother Mark, one of just three U-12 players on the panel.

In a lovely touch on Tuesday evening, two of his team-mates and three of the management team visited Ben at his house in the Grange on the Borris Road for a Covid compliant photo shoot with the trophy.

Monday’s win brought the curtain down on a busy week for the lads, who had beaten Na Fianna Og in the final group game last Monday and then the same opposition in hard-fought semi-final on Friday.

And there is no rest for the wicked, with the 2021 U-15 and U-13 competitions getting underway next week.

As well as that the two O’Connors are also talented soccer players with Ben recently named on the Carlow-Kilkenny U-14 squad for their League of Ireland season.

They’ll be hoping that this U-13 football success will be the first of many county final triumphs with The Town.

SEE ALSO – Laois’s newest soccer club on finding a home, making a great start and plans for the future