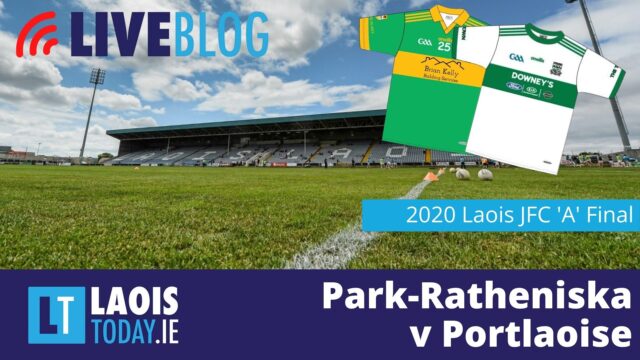 Laois GAA have made great progress on their delayed 2020 championships over the past couple of weeks and they’ll cross another final off their list this evening in O’Moore Park when neighbours Park-Ratheniska and Portlaoise meet in Junior ‘A’ football final.

The sides returned to action last Friday night with their respective semi-finals – with Portlaoise seeing off The Heath and Park-Ratheniska surviving a late scare to beat Ballyroan-Abbey.

Park-Ratheniska have been the proverbial bridesmaids of this competition since being relegated from intermediate at the end of the 2014 season.

Park-Ratheniska’s last success in this grade was in 2006 when they later went on and won the Leinster junior club title.

Portlaoise, who are probably slight outsiders, field an experienced side with what is the club’s third-choice team – they also have teams at senior and intermediate level.

Incidentally they can’t be promoted if they win this evening – meaning a playoff would be needed between Park-Ratheniska and Annanough, the side that were relegated from last year’s intermediate championship.

For now, though, that isn’t the main consideration.

The game throws in at 7.30pm and in the event of a draw after extra time, a penalty shootout will be needed.