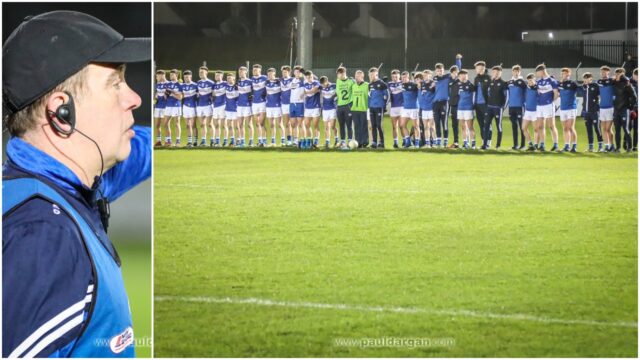 Eddie Kinsella’s Laois U-20 footballers begin their Leinster championship away to Wicklow this evening.

But Kinsella’s charges head for Aughrim for a 7.30pm throw in – with their hosts as the bookies favourites.

And that, presumably, is down to the fact that three years previous, this Wicklow team made a serious impression at minor level.

That competition was ran on a group stage with the 11 competing teams split into two groups – with the top two advancing to the semi finals.

Wicklow were in a group containing eventual champions Meath and Dublin – with them managing to defeat and knock out the latter.

Laois defeated Wexford and Longford, lost heavily to Kildare but drew with Carlow to reach the semi finals.

There, Laois were well beaten by Meath. But on the other side, Kildare required a replay to get the better of Wicklow.

And the majority of their main players from that campaign are part of the panel that is set to take to the field tonight.

But Laois have plenty of quality of players themselves – with six of those who played in last year’s final on the panel this year.

Captain Damon Larkin and Daragh Galvin started, although the latter is struggling with an ankle injury.

Sean O’Neill, Ross Bolger, Sean Michael Corcoran and Josh Lacey all appeared as subs in the final and are available for selection again.

In the goals, Ballylinan’s Tom Wright will fight it out with Portlaoise’s Michael O’Connell.

There are also three dual players – and those of those played the entire match against Westmeath on Tuesday evening.

Crettyard’s Ciaran Burke and Ballyfin’s Allan Connolly seemed to come through that game unscathed so should be in a position to play here.

While O’Dempsey’s Fionn Holland was an unused sub so should have plenty of energy if selected in defence.

Cathal Bennett, Sean Greene, Adam Dunne and Eamonn Delaney are among players vying for positions in the back six.

In midfield, it is understood that Mountmellick’s Cian McCann has departed the panel leaving the aforementioned Burke, Portlaoise’s Kevin Swayne, Ballyroan-Abbey’s Cathal Doyle and Portarlington’s Sean Michael Corcoran to fight it out.

While in attack, Stradbally’s Darragh Carolan is out after sustaining a broken wrist in training a few weeks ago.

The game throws in at 7.30pm and we’ll bring you all the action as it happens on our Live Blog.

If Laois win, they will be in quarter final action next week.