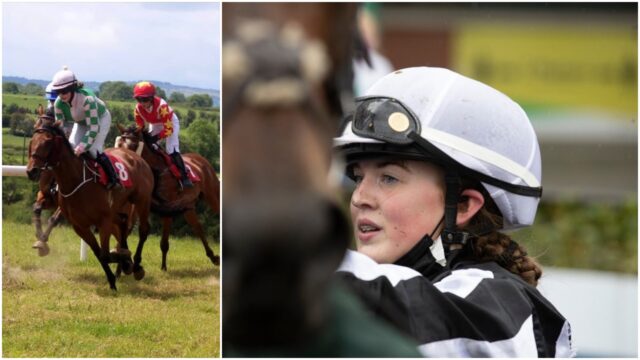 There were joyous scenes in Fairyhouse yesterday as a young Laois jockey steered home her first winner in just her third ever race.

Julie McDonald, who hails from Spink, was on board Miss Louise in the first division of the 45-65 mile and a half handicap.

In the year of Rachel Blackmore’s stunning Cheltenham success – it is brilliant to see another female jockey make a breakthrough.

The 10lb claimer made her race-winning move three and a half furlongs from home as she sent her mount past the favourite Angel In The Sky.

18-year-old McDonald kept her up to her work and the pair sailed home by two and a quarter lengths at 10/1 for Castlecomer trainer Pat Murphy – who was delighted with Julie.

Speaking to IrishRacing.com afterwards, Murphy said: “It’s a special win for Julie on just her third spin. She is with me for three years and took her licence out in January.

“She has been riding this filly for a few weeks now and seems to have got a nice tune out of her. Julie used to do a bit of pony racing.

“I’d like to thank the owner, Oliver Casey, for giving Julie the ride. The mare had become inconsistent and we said we’d try something different. If anything, Julie has helped rejuvenate her.”

We caught up with Julie, who just sat her Leaving Cert in Heywood last month, after the race.

She explained how she got involved in horse racing.

Julie said: “I first got involved with horses when we had a little pony at home.

“I just started sitting up on and from there, I started Pony Club with the Laois branch.

“From there, I started hunting with the Laois Foxhounds. All this was great grounding. I started pony racing when I was 15 and I was very lucky mam (Sile) and dad (Paddy) drove me to all the races all around the country for it.

“The pony racing got me hooked and I learned a lot from it.”

Reflecting on yesterday’s win, Julie paid tribute to trainer Pat Murphy for giving her the ride.

She said: “I work full time for Pat Murphy the last three years. He’s based in Castlecomer and we have a great team there.

“I got out my apprentice licence with Pat in January and I’m so grateful to have a winner on my third ride on the track.

“Big thanks also to the owners for putting me up.”

Looking to the future, Julie is hoping

She said: “My hopes for the future would be to hopefully ride a couple of more winners and drop some off my claim.”