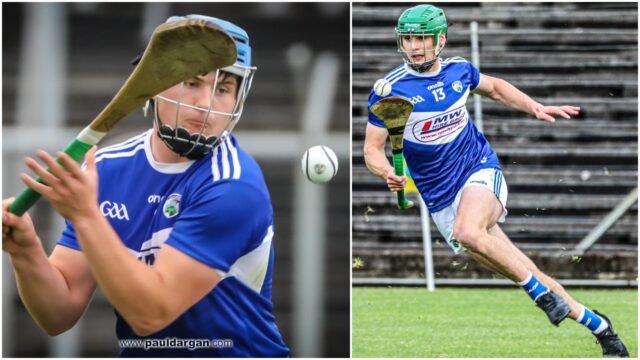 Ollie Hally’s Laois U-20 hurlers are back in action this evening as they aim to take a place in the Leinster semi final.

Nowlan Park is the destination for a clash with Kilkenny and the bookies have the home side priced at 1/20.

In Round 1, Laois were 15 points ahead of Westmeath at the start of the second half but threw it all away and needed a last gasp point to force extra time.

James Duggan top scored with 3-5 while Mossy Keyes showed nerves of steel at crucial times as Laois advanced by six points in the end.

Last week, Laois took on Antrim in Round 2 in Navan and this game was far less dramatic.

As with the Westmeath, Laois built up a huge lead by half time – but this time they did not throw it away.

While centre forward Tadhg Cuddy was flawless from frees and play – finishing the game with 14 points as Laois won 4-27 to 0-7.

Over the course of the two games, a number of players have shone – and when you consider just five of the starting 15 from those games are overage next year, it shows how well the team has done.

Only Lorcan Fitzpatrick, Allan Connolly, Thep Fitzpatrick, Ciaran Byrne and Mark Hennessy are ineligible to play once again next year – and all of those have played very well this year.

Cathal Murphy and Podge Brennan, who were minor last year, have competed very well at this level.

Gearoid Lynch and Tadhg Cuddy carry a scoring threat on the half forward line while the full forward line of James Duggan, Ciaran Byrne and Mark Hennessy are electric.

Captain Fionan Mahony has shaken off a hamstring injury and is now fit to start with the aforementioned Brennan dropping to the bench.

As for tonight’s opponents, Kilkenny have not actually played yet as they received a bye to this stage.

Kilkenny went on to reach the Leinster final where they were involved in a crazy game with Dublin.

This meeting is the nineteenth at this level and Laois’s most recent success was in 1978.

Should Laois advance, they will play either Galway or Dublin in the semi finals next week.

With a restricted crowd due at the game, we will bring you all the action as it happens via our Live Blog.