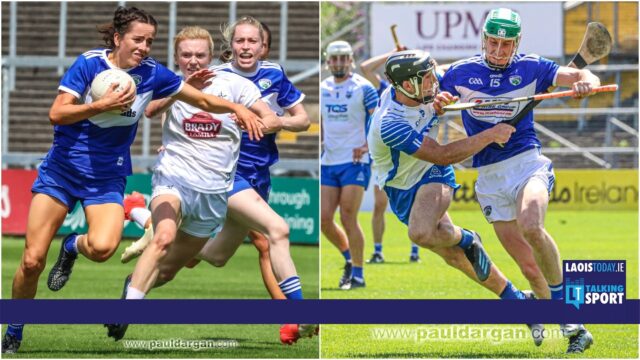 On the hottest weekend of the year, Laois GAA fans were treated to two incredible championship matches, both of which went right down to the wire.

On Saturday the senior hurlers pushed Waterford all the way in the All Ireland Qualifiers before eventually succumbing to a five-point loss.

Presenter Steven Miller is joined by Alan Hartnett and Damien Carter to look back on that game.

Though disappointed that Laois didn’t pull off a shock win, there has been a marked turnaround in approach since losing the opening game to Wexford.

But despite exiting the championship the season isn’t finished just yet and Laois face Westmeath in the Division 1 league playoff this Saturday in O’Moore Park in a fixture that is likely to go right down to the wire again.

Steven and Alan also look back on Laois’s win over Kildare in the All Ireland intermediate ladies football championship.

The ladies have played in a number of thrilling games already this year en route to winning the Division 3 league title – and their championship opener was an epic too.

They led by eight points early in the second half, trailed by four at the water break and eventually won by two.

They now play Roscommon in their second group game this Sunday where a win would see them top the group and face Louth or Offaly in the All Ireland quarter-final.

A draw or a loss of three points or less would see them through in second place to play Leitrim.

Alan also looks back on the club football league matches he was at at the weekend while the Go Games, a LaoisToday Golf Society and a Harry Kane apology also get a mention.

You can listen to the latest episode in full on Apple Podcasts or Spotify or below on Soundcloud.

The LaoisToday Podcast · Hurlers go down fighting, ladies off to winning start and club leagues heat up