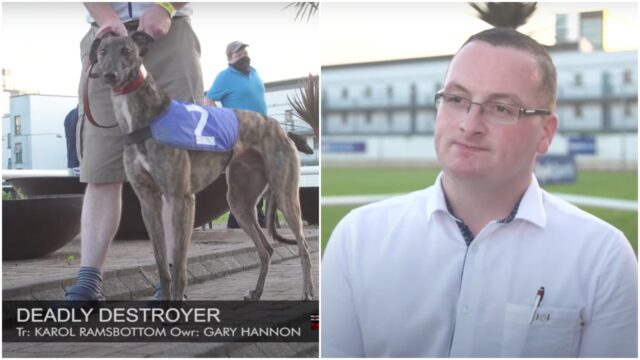 A Laois greyhound trainer was in the winners enclosure following a very prestigious race at the weekend.

Following a fast start in Shelbourne Park, Deadly Destroyer left all rivals – including favourite Ballymac Ariel – in his wake.

He landed the €7,500 first prize for trainer Ramsbottom and owner Gary Hannon.

Speaking after the race, Karol paid tribute to the breeder and also confirmed they would now head for the Irish Derby.

He said: “He’s a lovely dog. We’re delighted with that because we were a bit worried about the draw.

“He is a good little dog and he is only two and a half.

“I am delighted for the owner Gary Hanlon and also for the breeder Brian Doyle from Kilkenny.

“They call him ‘the Banger’ and he told me that this was a good little dog and Banger was dead right.

“All systems go for the Irish Derby now.”

You can watch the race and Karol’s interview in full below: