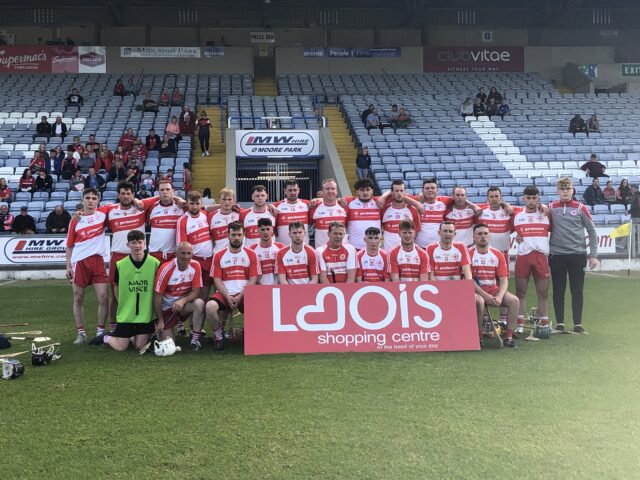 Trumera and Clonaslee largely went puck for puck in the first half, but in the second Trumera blew Clonaslee out of the water to win by 12.

The sides started nervously and chances were at a minimum. A Niall Sinnott free gave Trumera the lead before Clonaslee took the lead in dramatic fashion.

Cian Conroy burst through on goal and a penalty was awarded for a chop down. DJ Callaghan stepped up and pinged the ball low into the corner of the net.

To their credit, Trumera responded calmly and had the majority of chances that followed. Scores from distance from Niall Sinnott (free), Bryan Bredin and Conor Madden levelled things up.

Clonaslee hit wide after wide and Trumera nearly punished them after 22 minutes. However, Thomas Tynan pulled off two outstanding saves in a row to keep Trumera at bay.

Unfortunately for Tynan his second save resulted in a game ending injury.

Clonaslee then found the back of the net again as momentum swung their way. A shot from distance hit the post and fell to Niall Corbet and he set up Cian Conroy who made no mistake from a tight angle.

Once again Trumera responded well, although this time it was with a green flag.

Substitute Adam Kirwan turned over the Clonaslee substitute keeper, Christy Conroy, and fired the ball into the back of the net.

Clonaslee had yet another goal chance with the last puck of the first half but Niall Corbet could not convert. This left the scores at 1-6 to 2-4 to Clonaslee at the break.

Incredibly with no real wind in play, Clonaslee only managed three points in the second half and Trumera barely missed.

Callaghan pointed a free within seconds of the throw in but this was cancelled out by an incredible sideline from Conor Madden. It was here where Trumera went on their scoring spree.

Kirwan, Coogan (2) and Brophy pointed for Trumera before Clonaslee finally replied through a great score from Callaghan.

With 16 minutes to go, Niall Corbet pointed for Clonaslee but this would be their last score of the game.

Trumera then replied with the knock out punch as Daniel O’Connor flicked the ball over the oncoming keeper to give his side a comfortable lead.

Clonaslee did create chances but their accuracy let them down. They perhaps pushed for goal too early as they had two 21 yard frees saved with plenty of time still on the clock.

As Clonaslee pushed men forward this left them vulnerable to quick counter attacks and Trumera kept the scoreboard ticking over with points from Kirwan, Brophy and Lalor.

Clonaslee did break through for a late goal chance but Caolan Murphy put his body on the line to deny Corbet a comeback goal.

Murphy then topped off the Trumera performance with an amazing point of his own from the sideline as they now go on to face The Harps in the final.