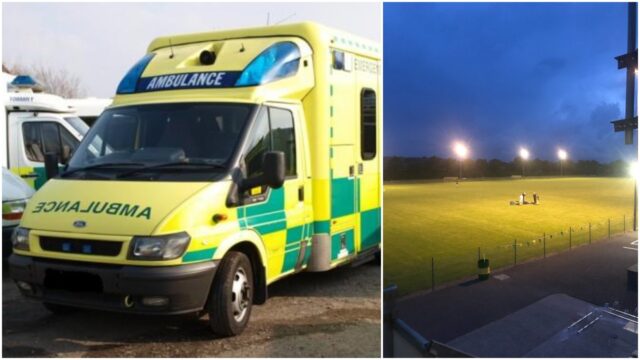 A Laois teenager who sustained a serious injury in a GAA match last night was left stricken on the field for hours afterwards as an ambulance failed to arrive.

The minor hurling championship got underway across the county last night and the meeting of Park-Ratheniska-Timahoe and Na Fianna took place in Ratheniska.

The game, which threw in at 8pm, was just 21 minutes old when a 15-year-old Park-Ratheniska-Timahoe player suffered a leg injury.

Once the severity of the injury was detected, the game was abandoned and an ambulance was called for.

However, at 10.20pm, the ambulance still had not arrived and the player had now been lying on the field for two hours.

When another call to the emergency services was put through, officials in Ratheniska were told that it ‘could be a few more hours yet’ before one arrived.

At this point, officials managed to locate a van and carry the injured player on a stretcher and place him into the back of it to transport him to A&E in Portlaoise.

Speaking about the incident, club member Brian Ramsbottom said that the whole ordeal was ‘simply not good enough’.

He said: “Two hours after logging a call with emergency services for an ambulance, our player still laid prone on the ground waiting.

“We were told that it ‘will be a few more hours’ so at that point we arranged to bring him in ourselves.

“This is the second time in two weeks that we’ve been waiting over two hours for an ambulance.

“The last time was after a clash of heads with both players vomiting. The ambulance eventually arrived from Naas. It’s not good enough.

The player in question sustained a fractured bone in his ankle and all in LaoisToday wish him a speedy recovery.

LaoisToday have contacted the HSE for comment on the matter.