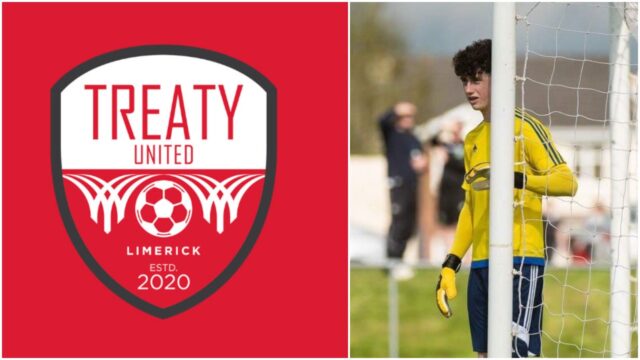 Treaty United have signed a new goalkeeper for the remainder of the League of Ireland season – and he hails from Laois.

Portlaoise’s Sean McCormack has transferred to the First Division side for the rest of the year.

He had been playing with Portlaoise AFC in the Leinster Senior League.

McCormack joins a team who are currently sitting third in the table – 11 points behind leaders Shelbourne but just adrift of second placed Galway United on points difference.

Treaty United was founded in 2020 in the place of Limerick FC and play their home matches at Markets Field, the same ground as their predecessors.

McCormack is the second Laois player to sign for the club as Emo native Gillian Keenan plays for the Treaty United women’s team in the Women’s National League.

As well as playing for Portlaoise AFC, McCormack also represented University of Limerick and they reached the Collingwood Cup final in 2019 where they lost to UCC.

McCormack’s signing takes the Laois interest in the division to two as Stradbally’s Garry Comerford is playing for Athlone Town.

Coincidentally, the pair could actually clash on Friday evening as Athlone Town and Treaty United are set to face each other in the next round of league fixtures.

The Clonaslee native, who has played in goal for the Laois senior footballers for the last two years, would certainly be a big addition to Portlaoise who have made a flying start to the new Leinster Senior League season..