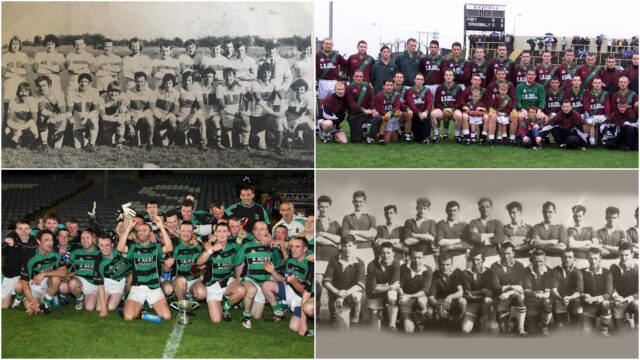 Ten months after the quarter-finals of the Laois SFC, the action resumes this coming weekend with the delayed 2020 semi-finals.

On Friday night Emo and Graiguecullen will do battle in O’Moore Park in the first semi-final with Ballyfin and Portarlington meeting on Saturday evening.

And there will only be a short turnaround with the final fixed for Sunday week, August 15, just under three weeks from the start of the 2021 championship.

On Monday night just gone, the draws for the Laois senior football championship semi-finals were made pitting favourites Portarlington against Ballyfin and Emo against Graiguecullen.

It’s the first time that the final won’t have been played in the calendar year it started since 1955. That year, incidentally Portarlington won both the 1954 and 1955 championships, a feat they will be looking to repeat over the coming months.

With Portlaoise out, having been beaten first by Portarlington and then by Emo, the competition has been blown wide open.

With the conclusion now in sight, however, one thing is certain: one club is going to going to end a famine.

Though they sit joint third – with Graiguecullen – on the Laois SFC roll of honour with 12 titles, Portarlington have experienced famines before.

The last time they won the championship was in 2001 and they haven’t even been in a final since. Indeed they went 16 years without being even in a semi-final prior to 2017.

They have gone in spurts like this previously over the years.

When they won the 1988 final for the first time, it ended a 29-year wait, and that final was the first appearance since their neighbours O’Dempsey’s beat them in the ’63 decider.

This will be their third semi-final in four years and as things stand they’re the outright favourites.

Graiguecullen’s last success was in 1965, something the club marked with an occasion in their clubhouse in the winter of 2015.

They briefly lost their long-held senior status in 2007 when they were relegated to intermediate though they bounced straight back up and have generally been quite consistent in reaching the latter stages.

Like Portarlington, this will be their third semi-final appearance in four years.

Emo’s one and only Laois county final success was in 1972 when they got the better of Graiguecullen.

They were beaten after a replay two years later by neighbours The Heath and have since gone on to lose finals in every decade.

On two occasions in the past decade they have suffered relegation but bounced back immediately in 2012 and 2017.

Ballyfin – have never been in a Laois SFC final

Not only have Ballyfin never won a Laois SFC title, they have never even been in the final.

But they’re in a second semi-final in succession and will be keen to defy their outsiders tags when they meet Portarlington in what will be the first ever senior championship clash between the sides.

Ballyfin only came up to senior for the first time after winning the intermediate title in 2014 and were in the relegation final as recently as 2018.

The club’s football success has been limited over the years and includes that intermediate triumph in 2014 and Junior ‘A’ success in 1995 and 2010.