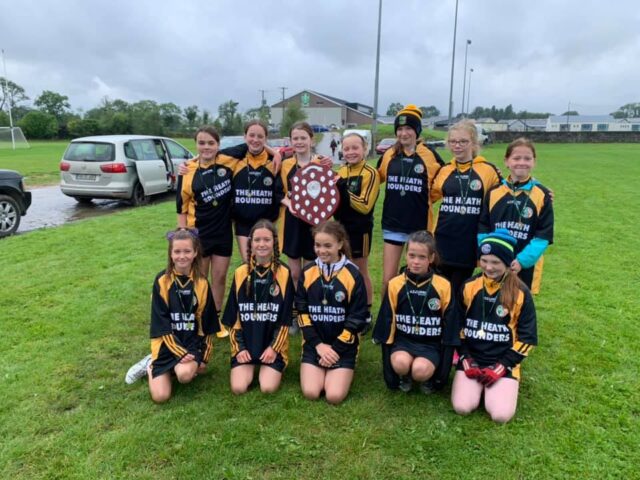 The Heath U-13 girls’ rounders team were crowned All-Ireland champions following a faultless display in Longford on Saturday.

In horrible conditions, the girls put in brilliant performances all day winning all five games. Captain Emma Sheeran along with Hannah McNamee starred for The Heath in every game.

First up for The Heath on Saturday morning was a tough assignment against Athenry of Galway. The Heath got off to a great start with Sheeran and McNamee leading the way with excellent displays.

The Heath saw out the game and made a winning start to the day. Next up for The Heath was against Bunbrosna of Westmeath. The Heath were now playing with confidence after the first game and made it two wins from two.

They now had qualified for the semi-final but now played Easkey of Sligo to determine who would top the group.

After a tight game The Heath pulled away in the last innings to top the group and set up a semi-final clash against Na Fianna of Dublin.

This was a tense semi-final with Na Fianna throwing everything at the Laois side, but The Heath responded in kind and got over the line beating Na Fianna 2-1 and now they were one game away from being champions.

In their way was once again Easkey of Sligo who they played in the group stages. The game was a tight encounter all the way through.

Easkey went 5-4 up coming into the last two innings and it was looking like they were going to get revenge after their loss earlier in the day.

The Heath showed the hall mark of champions by not panicking and turned the game around in the last innings.

Yet again Hannah McNamee, Emma Sheeran and Kate Maloney combined to getting Easkey out with The Heath becoming All-Ireland champions after a great day in the rain.