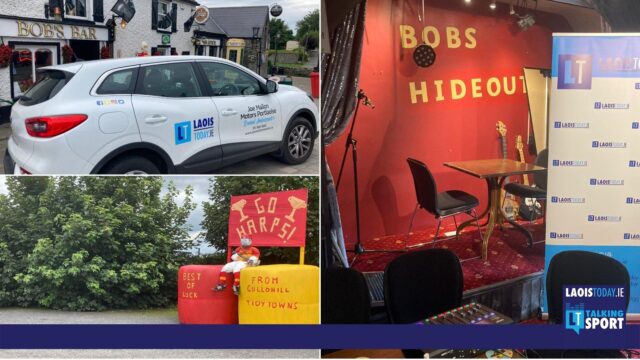 After so long being cooped up in offices and looking at each other on Zoom calls, the LaoisToday Talking Sport Podcast went on a road trip this week to record our hurling county final preview show.

Durrow was the destination and the picturesque Bob’s Bar was the venue as Steven Miller, Alan Hartnett and Damien Carter looked ahead to this weekend’s delayed 2020 hurling finals.

It was a behind-closed-doors recording in Bob’s Hideout upstairs – but all going well we’ll get to a venue at some point in the future with an audience. And as Christy Moore might say “with six creamy pints out on a tray”.

The Harps – who are bidding to win a first championship title for the parish with a main team since Durrow’s 1976 intermediate triumph – take on Portlaoise in the Premier Intermediate final on Friday evening while on Saturday Clough-Ballacolla and Rathdowney-Errill meet in the senior decider.

Both Durrow and Cullohill are decorated brilliantly in the yellow and red colours of The Harps as they seek to win the title in what is their third final in a row to be in.

Portlaoise, who got the better of The Harps in the 2018 final, though, will be serious opposition. Is The Harps time now? Alan and Damien reckon it is. Steven isn’t as sure.

As for the senior game, again it’s a hard one to call. Borris-Kilcotton are seeking a second senior title and a first since 2016 while you have to go back to 2015 for Ballacolla’s last championship win though they are going for a fourth in 11 seasons.

Again the lads are split on who will win it, and to rob a great line from former Limerick player and manager TJ Ryan: “It’s like a deaf dog. Hard to call.”

Alan and Steven also chat about the Laois camogie manager’s job, which is now vacant following the decision of John Desmond to step down after two years in the role.

We will have another episode out on Thursday morning to look ahead to the 2020 senior football final between Portarlington and Graiguecullen as well as the All Ireland intermediate ladies football semi-final on Sunday between Laois and Wexford.

During this episode we made reference to a recent underage game between Portlaoise and The Harps. We’re happy to clarify that The Harps management never made any comment in relation to the game in question.