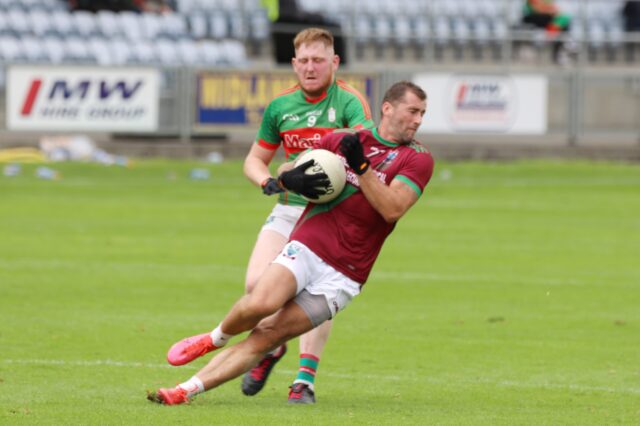 And after the longest Laois club championship season in living memory, Portarlington are the last men standing.

They were comprehensive 1-15 to 0-7 winners over Graiguecullen in O’Moore Park this afternoon, and the result never looked in doubt from an early stage.

It is the club’s first championship success since they beat Stradbally in 2001, and the first time that the Laois SFC title was won outside the calendar year it started since 1955, when Port themselves won it twice in the space of six months.

But there was no doubting across the past 12 months that they were the best team in the championship, winning the semi-final and final by 10 and 11 points respectively and only conceding one goal in five games.

Here we look through the various talking points including our choice of Man of the Match.

Man of the Match – Rioghan Murphy

Portarlington had a number of top quality performers but Rioghan Murphy stood above everyone in an exceptional display.

He kicked two points from play but was all over the field over the course of the 60-plus minutes, winning loose ball, running at Graigue and using every possession sensibly.

He belied his young age and was class from first minute to last.

When Port won the 2001 Laois title in some style – and later went on a good run in Leinster that culminated with a home clash with Dublin giants Na Fianna – few could have predicted that it would be another 20 years before they’d win it again, never mind reach a final.

But they went into decline not long after that success and in some years were closer to relegation than contesting for silverware.

Over the last decade, however, they have shaken themselves from that slumber and just as they did in the 1980s they began regularly winning underage titles.

That 2019 semi-final loss to Portarlington was hard to take but there was to be no denying them this year.

While Rioghan Murphy was our choice of man of the match, Colm Murphy had an excellent game too, finishing with six points to his name, from play, frees and a mark and a hand in a couple of more scores too.

His older brother David, who is playing senior with Port for the best part of 20 years, and is 36 this year, scored two points from play and wasn’t nullified by Mark Timmons to the same extent as other forwards this year.

Since Port turned the corner a couple of years ago and became a credible senior contender again, the Murphy brothers have been absolutely central to all they do. And they delivered in style again today too.

And now he has worked his magic with Port. Though a proud Gracefield and Offaly man, he has strong family connections in Port and was enticed to the job ahead of the 2019 season.

That ended with a controversial semi-final loss to Portarlington but they came back stronger this year, and have overcome both Covid and a series of decent challenges on the pitch: beating Stradbally, Portlaoise, O’Dempsey’s, Ballyfin and now Graigue to end their wait for success.

For Murphy it means he has overseen championship glory with two different in three different decades. That’s some going.

Can Port get stronger?

Port played this entire championship without Paddy O’Sullivan, who was on overseas duty with the army for the games in 2020, and then ripped his hamstring badly in a league match a couple of weeks ago.

They also had various injuries for other games but took them all in their stride.

The strength of their panel is no secret and with county underage players like Colin Slevin, Darragh Galvin and Sean Michael Corcoran on the bench as well as experienced senior club players like Stephen O’Neill, Eoin McCann, Johnny Fulham and Cathal Ryan, there is no reason why they can’t add more to their collection in the coming years.

They begin their 2021 season against Ballyfin in early September and will start the next championship as favourites – and seeking to repeat the feat of 1955 when they won two championships in the same year.

While Port are on cloud nine, Graigue can only look back on a game that got away from them early on.

They only got one point from play (from full-back Mark Timmons) though Ross Hennessy did get a mark in the first half as well.

Having been so controlled in reaching a first final in ten years, they were second best from the off here.

Their kickouts, a feature of their wins to date, didn’t go as well in the opening half and a seven-point deficit at half time was a bridge too far, even with the wind at their backs in the second half.

While there is no Leinster club championship for Port to play in, they will be back in O’Moore Park in three weeks time for the opening round of the 2021 campaign against their semi-final victims Ballyfin.

They are also scheduled to play Portlaoise in the league final next weekend.

For Graigue, they have a first round game against The Heath on the first weekend of September.